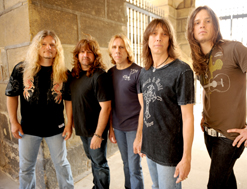 Hello rock fans! It’s Andy Gesner and the indefatigable staff of HIP Video Promo, here with a winning clip from one of the most reliably entertaining hard rock bands in America. Tesla has known the trappings of international fame: platinum disks, heavy rotation, fans in every corner of the globe. Yet even at the height of their commercial success, there was always something approachable and human-scale about the group. No rock star poses for Tesla: their sound, style, and stance has always been immediately identifiable. Unpretentious, direct, raw, and hard-hitting, Tesla spoke directly to their listeners – which is probably why they’ve held on to their mass audience while so many of their peers have not. These days, Tesla keeps it as “indie” as any garage-punk band, recording, releasing, and promoting their music themselves. “Falling Apart”, their latest video, was produced by the group. Independent action suits the blue-collar Tesla aesthetic well: they’ve always had a personal relationship with their rabid fanbase, and they’ve never needed any intermediaries to bring their music to the people.

So if there’s been any ebb in Tesla’s popular support, we can’t detect it. Forever More, their independently-released ’08 set, made the Billboard Top 40. The bluesy “I Wanna Live” made playlists across the nation. Tesla appeared at the Sweden Rock Festival and Rocklahoma, and launched a successful world tour in support of the album. And now comes “Fallin’ Apart” – a straight-to-the-heart power ballad as moving as any of Aerosmith’s summertime hits. Nearly two decades after The Great Radio Controversy stormed the charts, Tesla remains as vital, and as indispensable, as ever.

Much credit for the band’s lasting success must go to frontman Jeff Keith, whose rough, bluesy vocals have given the group its lasting sonic signature. Keith’s performance on “Fallin’ Apart” is sure to be remembered as a highlight of his long and storied career: it’s an engrossing, heartfelt, and passionately-sung tale of a relationship on the skids. Produced by Terry Thomas – the same man behind the boards for the band’s much-loved ’94 classic Bust A Nut – the track builds from its ruminative verse to a fiery, indelible chorus.

The clip for “Falling Apart” tells a story, too. Shot in the band’s hometown of Sacramento (there’s even some striking footage of the California capital’s landmark Tower Bridge), the “Fallin’ Apart” video follows a winsome young couple as they attempt to repair their lives together. We’re shown their courtship, their quarrels, their memories of better times, and their eventual reconciliation; the characters are archetypes, and their struggle feels iconic. But there’s another beauty in this clip, too: a cherry-red 1956 Thunderbird. The vintage auto steals every scene it’s in – it’s a crimson streak in the California night, and a candy-colored treat by day. The T-bird is a classic American rock and roll car; paired here with the music of a classic American rock and roll band, it’s an unstoppable force, and half of an unbeatable combination.

We are stoked to be back working with the legendary Tesla once again to bring you the new “Fallin’ Apart” clip! If you would like to see this musical tsunami live, they will be touring the country throughout the month of April. If you need more info, call Andy Gesner at 732-613-1779 or e-mail us at info@HIPVideoPromo.com. You can also visit www.TeslaTheBand.com to find out more about Tesla.