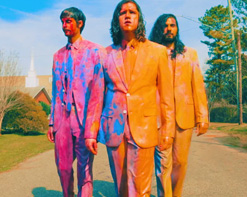 There are new bands and new music coming out of Birmingham, Alabama every day. From country rock to rap, “the Magic City” is a rising music scene. Whether is be Nerves Baddington, Future Elevators, or Shaheed & DJ Supreme, Birmingham is a scene worth championing. The Burning Peppermints are no exception, bringing the punk of the early 2000’s back into your garage with their raw grungy style of rock and roll with their new single “Don’t Try To Lie To Me.”

Playing alongside acts such as The Dirty Lungs, Diarrhea Planet, and St. Paul & the Broken Bones, this band has been buzzing since their formation in 2012. Since then, they’ve self-released a debut album as colorfully punk as their name, entitled Dirty Rainbow. While Vanyaland listed The Burning Peppermints as one of the most ridiculous band names at South by Southwest 2017, Glide Magazine has ranked them among the top 20 to see live at the festival that year. The band draws influences from the growing and longstanding psychedelic scenes of Los Angeles, Austin, Nashville and beyond, but claim to create a refreshing combination of “dingy garage rock and West Coast surf, all delivered via an infamously aggressive live performance.”

A splash of candy-colored aggressive punk is literally what this band creates in their music video for “Don’t Try To Lie To Me.” Video director Dez Wilson, along with frontman Jake Wittig, combined classic elements for this band’s smash debut music video. Wittig, flanked by bassist Ahmad Farzad and percussionist Ryan Colebeck, approach the viewer slowly wearing stark white suits while being furiously splashed with colored paint. Wittig sings the lyrics to the camera with a fervent glare, giving a taste of their electrifying live performances. This clip is a perfect visual analogy for their vibrant sound and airtight authenticity.

We’re very excited to be working with The Burning Peppermints on their new video for “Don’t Try To Lie To Me.” The visceral reaction this video has given all of us here at HIP Video Promo is one we’re eager to share with programmers and viewers alike. Please contact Andy Gesner and the HIP Video Promo team at (732)-613-1779, email us at info@HIPVideoPromo.com. You can also visit www.TheBurningPeppermints.com for more info on The Burning Peppermints.