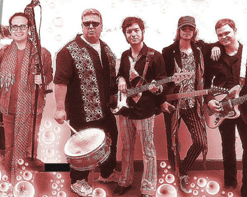 Transforming contemporary music, The Cherry Drops have built their musical creations around classic influences like The Beach Boys, The Beatles, The Monkees, and countless other artists. HIP Video Promo is pleased to present their newest video “Outta Sight” where The Cherry Drops redefine the workweek with party-rockin’ guitars and strong vocals.

The Cherry Drops exploded onto the musical scene on a hot day in the summer of 2012. The band is comprised of principal songwriters Vern Shank on lead vocals and guitar and Joshua Cobb, who is known for his dynamic background vocals and production techniques. Rounding out The Cherry Drops sound is Evan Foster from Seattle, WA lending blazing guitar riffs to “Outta Sight”, and bassist Jamie Markowski and drummer TJ Rosenman.

Musical sounds of The Cherry Drops were developed from Shank’s love for 60’s & 70’s bubblegum, garage rock and power-pop music genres. It has been defined as a groovy pop sound, like something you thought you’ve heard before, yet never have. Throw in a blender the harmonious sounds that are reminiscent of The Beach Boys, The Beatles, The Archies & some Partridge Family along with a little flare, and you’ve got the formula for their standout album, Everything’s Groovy. It’s an unending parade of rock and roll gems and standing out above them all is the track “Outta Sight!”

“Outta Sight” is a video that exhibits your typical nine-to-five work week. Set in a drab office, the introduction to the clip explains how mundane and typical working can be. We follow the workers as their boss leaves town on an office party adventure that winds up changing the entire mood of the character of the boss. What began as a party ended up being a revolution. Filled with sand, surf, and one heck of a rockin’ guitar solo, “Outta Sight” is one non-stop party.

It’s an exciting opportunity to be working with such a stellar bunch of artists. We’re here to get you anything you may need to get this video into your rotation, including copies of their new album Everything’s Groovy, so don’t be shy and get in touch! For more information on this exciting new band, please contact Andy Gesner and the HIP Video Promo staff at (732)-613-1779 or email us at info@HIPVideoPromo.com. You can also visit www.TheCherryDrops.com for more information.