The Chordaes “Cry Another Day” 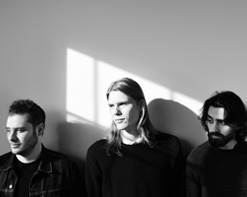 The Chordaes, who recently released their debut album, Touch the Ground, have made it their mission to bring back great, anthemic rock-n-roll. The band’s songwriter, lead vocalist, and guitarist, Leo Sawikin, crafts complex harmonies, innovative chord and tempo changes, and heartfelt lyrics, inspired by such artists as Radiohead and late-era Beatles.

Along with Leo, The Chordaes’ lineup includes Ethan Glenn on drums and Nick Haberstroh on bass, with frequent collaborator Max Ventura on keyboards. The band recorded the first tracks for their debut album, Touch the Ground, in August 2014 under the production of veteran Marc Swersky at Shorefire Recording on the Jersey Shore. As early tracks emerged from the sessions and were released, they received strong college radio support as well as premieres and features on Earmilk, Pancakes and Whiskey, BlackBook, and more. Deli Magazine even named the band the number one NY-based emerging alt rock band of 2015. Touch the Ground was officially released in May 2016.

Conjuring a mood of despair and loneliness, “Cry Another Day” slows the album’s tempo, then pulls out all the stops as it builds over a beautiful string arrangement by cellist and arranger Dave (Viva La Vida) Eggar to a climax highlighting Leo’s searing vocal. People who are “hungry for real music again” will be transfixed by “Cry Another Day.”

The video, directed by Phil Harder, features an innocent, otherworldly angel as she travels around a cinematic cityscape, at first curious about this strange new place, then increasingly troubled and perplexed by the hardship and sorrow she finds everywhere. As the spellbinding vocal intensifies, the video perfectly portrays the angel’s growing sadness as she encounters the darkness of this world. Both political and personal, “Cry Another Day” is an unabashed power ballad for this moment.

For more information on The Chordaes and the “Cry Another Day” music video please contact Andy Gesner and the HIP Video Promo team at (732)-613-1779 or email us at info@HIPVideoPromo.com. You can also visit www.TheChordaes.com for more info on The Chordaes.