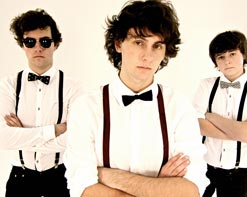 Although young in age, The Christopher Brothers possess considerable musical talents well beyond their years. Cameron, the drummer (18), Charles, the guitarist (16), and Ethan, the bassist (13), all write, play and produce their own music, as well as play an impressive collection of over 80 retro classics and current hits that appeal to audiences of all ages. Their debut video for “Somebody Just Like You” is a daring presentation of the band expressing what it is to be a teen and trying to find “somebody out there who feels the way they do”, which all of us can relate to, teen or otherwise. For those of us who appreciate artists that present themselves in such an exposed way, this is a video to watch!

Having achieved over 280,000 Facebook fans, the band has a steadily growing and dedicated fan base of all ages from countries all over the world. Their performance resume includes performances at the world famous Whisky a Go Go, The Roxy, LEGOLAND California, Six Flags Parks, shopping malls, and schools throughout the U.S., as well as opening for music legends Al Jarreau, Spyro Gyra and WAR at the Vancouver Wine & Jazz Festival. Their new full-length album, Dog Daze, exhibits their uncanny ability to blend an accessible pop sound with the urgency and conviction of alternative punk/rock attitude. The first single is “Somebody Just Like You,” a touching reflection about wanting to find that special someone who makes the days better. Appropriately enough, the single was released to fan acclaim on Valentine’s Day this year.

The video for “Somebody Just Like You” is another gem directed by HIP favorite Jared Sagal of Rockerrazzi Films. The black and white clip is a snapshot into the mature style and swag of The Christopher Brothers, who perform with confidence and conviction for the camera. With nothing more than themselves and their instruments, the video is a minimalist showcase of the talents of Cameron, Charles, and Ethan. For the observant classic rock fan there is a nod to the Bob Dylan video “Subterranean Homesick Blues” with the brothers holding up signs with various statements to the camera. For a group that has grown up loving decades of the best music, it’s no surprise that they would think to channel a video from over 50 years ago! It’s an impressive clip from a group that is sure to explode in popularity before our very eyes!

Please join us in getting this video out to the masses and let us know what we can do to help! We would love to hook you up with copies of Dog Daze, or anything else that will get this video into your programming. Please contact Andy Gesner and the HIP Video Promo staff at (732)-613-1779or email us at info@HIPVideoPromo.com for more info on The Christopher Brothers.