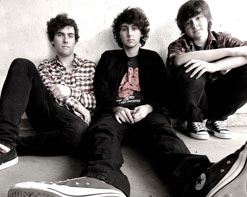 With over 420,000 Facebook fans under their belt, and a steadily growing fan base from all over the world, The Christopher Brothers are quickly breaking out of their mold of baby-faced rock and roll brothers and speeding towards full-fledged pop rock heartthrobs. Their chemistry comes naturally as siblings, but it is strongly reinforced by the countless stages they’ve shared over the years. The trio, Cameron, Charles, and Ethan, have built their brand the old fashioned way, through live performances all over the US and especially their home turf of southern California. In their new video for “The Girl Next Door” the band puts this flawless dynamic on full display with a fun and irreverent clip for audiences of all ages.

The band has hit the stage at venues such as the world famous Whisky a Go Go, The Roxy, LEGOLAND California, Six Flags Parks, shopping malls, and schools throughout the U.S., as well as opening for music legends Al Jarreau, Spyro Gyra and WAR at the Vancouver Wine & Jazz Festival. Their new full-length album, Dog Daze, exhibits their uncanny ability to blend an accessible pop sound with the urgency and conviction of alternative punk/rock attitude. All of this is rolled into one brilliant package in the brand new single for “The Girl Next Door” and the insanely infectious new music video.

Drawing wisely and effectively from the classic rock roll movies of the 60’s like Help!, A Hard Day’s Night, or Jailhouse Rock, “The Girl Next Door” is a fast-paced, black and white festival of fun. Inspired by true events in the boys’ lives, the video revolves around the new neighbor and the spell she has cast over them. They scramble and scheme for ways to get her attention, preparing a variety of pleasantries to leave on her stoop. Their ambitions pay off, seemingly, as the gift left on the doorstep have been taken. But have they been taken by the girl or by a rascal in their midst? A seemingly innocent rascal that fans of director Jared Sagal’s “The Young Ronaldo” video, that is…

All of us here at HIP Video Promo are super excited to be working with The Christopher Brothers once again and to share their vibrant approach to songwriting and performance. We would love to hook you up with copies of the new album Dog Daze, or anything else that will get this video into your programming. Please contact Andy Gesner and the HIP Video Promo staff at (732)-613-1779 or email us at info@HIPVideoPromo.com for more info on The Christopher Brothers.