The Early November “Something That Produces Results” 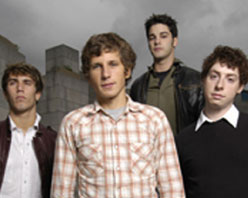 Happy holidays to all of my friends in music video land! It’s Andy Gesner and the staff from HIP Video Promo, back with another incredible clip from our Garden State friends, The Early November. We hope that you enjoyed the last Early November clip, “The Mountain Range In My Living Room,” and appreciate the support that so many of you have given this terrific clip. Now Ace and the gang are back with an extraordinary and compelling new video for you! The Early November have been on tour all autumn with Saves The Day and Senses Fail. In practically every city they have visited, they have been performing to sell out crowds. Even though their current record has been out for over a year, The Early November is still a favorite Drive-Thru band amongst the concert-going public.

Not only is The Early November loyal to their fans, they have the same respect and admiration for their peers in other bands as well. Included in the re-release of The Room’s Too Cold is a second CD titled Friends Of The Early November. This disc is a compilation of songs from other Drive-Thru artists, Rushmore artists, and bands that are just simply friends of The Early November (this band has tons of friends). Ace Enders and his bandmates wanted to pay homage to all of the other bands that are out there fighting the good fight, and it’s inspiring to see this kind of camaraderie amongst indie rock musical artists.

Although it’s been a while since we’ve heard anything new from The Early November, don’t fret. Once the band finishes their current tour in mid-December, they are going back to work on a whopping three disc record that they have been recording since early 2005. The trilogy is expected to be released in 2006, so be on the lookout! Until then, the band does have a three song sampler to satiate their fans needs.

With the re-release of The Room’s Too Cold, The Early November and Drive-Thru Records have decided to follow up “Mountain Range” with another concert favorite. “Something That Produces Results,” Ace’s open letter to an ex-girlfriend, pulses with fear, accusation, and a weird exhilaration. It’s easy to see why fans of the band have been so taken with this song. People of all ages can relate to the trials and tribulations that Ace so elegantly sings about.

The clip for “Something That Produces Results” is alive with a strange, flashing energy. It begins simply enough: The Early November onstage before a sparse audience, performance lights up, and Enders, lost in a trance, shouting the refrain as he strums. Yet there’s something unusual about this audience – the members appear oddly flat. But the second verse, we’re shown why: they are flat, two-dimensional figures standing on the dancefloor like thin cardboard cut-outs in a diorama. As the camera swirls around the room, objects are stripped of their specificity: they become grids, vectors, lines crosshatched and curved. All that is solid is replaced by the digital echo of its design. Soon, the whole club is a distorted checkerboard, and the group plays in front of a curtain of computerized pinstripes. Finally, the viewer is taken on a wild tilt-a-whirl ride around the club. A visual circumnavigation of the band reveals what we could have guessed already: the performers, too, are completely flat, and disappear momentarily when shot from the side of the stage.

Here at HIP we are thrilled to be working with Drive-Thru Records again to bring you this enticing new video from some of our favorite guys! We will have copies of The Early November’s new three song sampler for on-air giveaways. If you would like a copy, please don’t hesitate to get in touch! If you need more info, call Andy Gesner at 732-613-1779 or e-mail us at info@HIPVideoPromo.com.