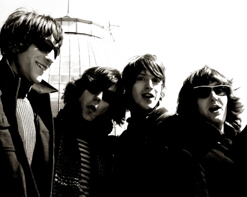 Hello to all of my music video cohorts! It’s Andy Gesner and the staff from HIP Video Promo, back with another superb clip from a much-loved indie band — THE GO. Their new album Howl on the Haunted Beat You Ride is a timeless psychedelicized pop rock touchstone. The stars of The GO show are the songs. No gimmicks, just elegantly crafted and meticulously executed tunes – like the one they chose for their new video “You Go Bangin’ On.” Their wild, take-no-prisoners live shows are the stuff of legend. But the four members of The GO have carved out an identity quite distinct from their many celebrated scene-mates. That’s not because of their source material – this quartet draws inspiration from the same Sixties garage-rock, classic RnB, rough-edged psychedelia, and British Invasion pop that has fueled the Motor City renaissance.

The 1999 release of Whatcha Doin’, their raucous debut, was one of the epochal moments in the garage-rock revival. It helped establish Detroit as the undisputed capital of the style, and it brought The GO national recognition as a band at the forefront of the movement. But as great as Whatcha Doin’ is, it’s got nothing on the recently-releasedHowl On The Haunted Beat You Ride. If Whatcha Doin’ was a relentless blast of street-energy, Howl is a well-paced and smartly-varied trip of exotically combustible compositions. In Motown, they’re already calling it a modern masterpiece; elsewhere, the album is climbing college radio charts and spreading GO fever across America. The band has taken to the road with the like-minded Willowz and White Stripes (among others), and plan to gig relentlessly during the balance of 2007. The White Stripes recently paid tribute to The GO by performing one of their songs in front of a sold out Canadian audience. Should you be in the mood for a dizzy, manic, and frighteningly tuneful rock set, check out The GO in a city near you.

Bobby Harlow is a first and foremost an ace tunesmith, and his attention to detail is second to none in Detroit, and maybe the world. He’s also one of the most protean singers on the scene: he can purr over a psychedelic breakdown like Syd Barrett, channel expansive Ray Davies, and then shout along with the distorted guitars like Roky Erickson at his wildest. The rest of the band follows suit, coaxing vintage sounds out of their amplifiers and charging through the tracks on Howl On The Haunted Beat You Ride with the fervor of RnB junkies. Their highly stylized creativity extends to their album art: the cover of Howl is pure psychedelia, and the song titles have been scribbled in shaky white-ink bubble letters of the sort you might find on old MC5 gig posters. Cartoonist M. Wartella exploded into the animation world after being featured on MTV2’s cult-favorite Wonder Showzen. His sequential work has appeared in anthologies from D.C. Comics to Fantagraphics Books and in magazines including Andy Warhol’s Interview and Spin. His illustrations have appeared on the cover of Vice Magazine (his infamous and now extremely rare scratch-off cover) and regularly in Nickelodeon Magazine. M. Wartella handles the band’s visual aesthetic, and has blessed the quartet with one of the most striking logos in underground rock.

Wartella’s also responsible for the animation in the clip for “You Go Bangin’ On”, which was animated by hand on top of every frame to achieve maximum “psych-out” effect. As the band plays against the black background, waves of Saturday-morning cartoon color flow from their instruments – a harmonica produces a wash of hot pink, yellow and blue waves, white zigzags fly up from the hi-hat, red lightning shakes free from maracas, and bright flowers blink into life around Krautner’s fretboard. The kick-drum becomes a canvas for the band’s lyrics (as well as other messages), and vibrations shoot from Harlow’s dancing body.

We are very psyched to be working with Howard Hertz, M. Wartella, and The GO to bring you this electrified, technicolor clip. We’ve been set up with plenty of copies of Howl On The Haunted Beat You Ride for all of your on-air giveaway needs, so please drop us a line if you’d like to get your hands on any. If you need more info, call Andy Gesner at 732-613-1779 or e-mail us at info@HIPVideoPromo.com. You can also visit www.CassRecords.com to find out more about The GO.