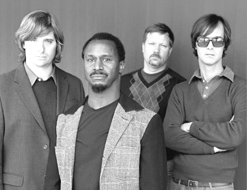 Hey, everybody, it’s Andy Gesner from HIP Video Promo, here with another irresistible clip from a longtime indie favorite. We can’t speak for everybody, but we think that puppets in music videos always steal the show. And when you want a puppet, why not go to the best? The Monkey Boys have built and performed the plush characters for shows such as Avenue Q, Book of Pooh, Go Diego Go! Live, Little Shop Of Horrors, and countless adverts and shorts. Their style – think Muppets with an edge – is instantly recognizable, and their unerring ability to bring their characters’ personalities to vivid life in a few gestures has won them fans around the world. Those most familiar with the Monkey Boys for their work in offbeat kids’ productions may be surprised to know that they also have performed the puppets for the decidedly-adult Crank Yankers. They’ve got no problem representing grownup entertainers – as their all-puppet incarnation of The Greyboy Allstars (and their audience) demonstrates!

The hip-shaking “Still Waiting” may just be the most irresistible thing they’ve ever recorded. Beginning with a scratchy guitar riff and a spare, funky drumbeat, it soon explodes into a groove altogether worthy of the Meters. (The track even opens with a Neville-style scream!) In classic New Orleans style, the cut is punctuated by thrilling saxophone and Hammond organ rides, but it’s the emotive, soulful lead vocal that makes “Still Waiting” so undeniable. As always, all five Greyboy Allstars turn in remarkable instrumental performances: rarely has a band this tight ever sounded so relaxed and cool.

Unsurprisingly, Greyboy Allstars shows often become dance parties. A video of the wild moves and motion on the floor at an Allstars performance would have suited “Still Waiting” just fine; instead, directors Josh Hassin and Matt Goldman have upped the ante considerably. In their inspired clip, everybody in the concert hall – from the band to the bartender to the patrons shaking it to the backbeat – is a Monkey Boys puppet. The puppets representing the Allstars themselves are detailed and expressive, and really do seem to be performing the song; such is the magic of the Monkey Boys animation. Out in the audience, we encounter all the familiar types: the dancefloor bully, the sexy rug-cutter, kissing couples and fall-down drunks at the bar, the poor old man whose refreshment keeps getting spilled. So engrossing and lifelike are the characters that you may forget you’re watching plushies, and that the actual puppetry involved in the “Still Waiting” clip is near-heroic in its complexity. In one sequence, a patron gets mad that another clubgoer is dancing with his girl: he picks up the offender, swings him by his ankles, and throws him onstage where he crash-lands atop the organ. Unfazed, the puppet Robert Walter clears him away with one arm, and launches into his solo with another!

Many thanks to Matt Hogan at SCI Fidelity Records for allowing us to bring you this awesome clip! Please be in touch for copies of What Happened To Television? if you’re interested in setting up a contest or on-air giveaway. If you need more info, call Andy Gesner at 732-613-1779 or e-mail us at info@HIPVideoPromo.com. You can also visit www.SCIFidelity.com to find out more about The Greyboy Allstars.