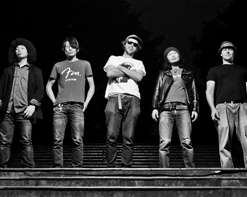 The music of the psychedelic Tokyo-based band The Mootekkis brings retro garage rock back into the modern era, fusing it with classic punk and straight up hard rock. This band delivers an innovative sound that is done in a style that has been described as boozy and loose. HIP Video Promo is excited to present the video clip “The Whiskey” with standing ovation.

As an east-meets-west Tokyo-based five-piece, The Mootekkis formed in the middle of 2008 and were even featured on the front cover of Japanzine after winning the magazine’s nation-wide battle of the bands. They went on to get air play on InterFM 76.1, one of Tokyo’s biggest radio stations and due to their no-holds-barred, beer-fuelled rock ‘n rolling, they have also been targeted by local drum and bass DJ’s for future remixes.

In 2012, they embarked on a ten day tour of New York where they played Manhattan hot spots like the Bowery Electric and Piano’s, as well as New Haven’s Elm Bar and a handful of basement/loft parties in Brooklyn. With a successful trip to America behind them, in 2013, their focus turned to shooting the video for the Hendrix-inspired tune “The Whiskey” and recording their 10-track debut album, Heckling the Dawn, due for release in October/November.

“The Whiskey” is a purely rock ‘n roll tune that emanates all that The Mootekkis’ sound encompasses. The style of the music video is a fusion of contemporary images that spread the appeal of these modern rockers. Scenes in “The Whiskey” are bold and go hand-in-hand with the power of this captivating tune. The psychedelic vibes and the beating each band member is dealt by the young comic-book-esque dame in the clip leave us mystified as The Mootekkis create a whole new genre that Jimi Hendrix would be proud to experience.

Bands like The Mootekkis come along once in a blue moon, and what they’re doing is something most people haven’t seen in a while—strictly rocking and rolling. Their music is truly an experience that fuses psychedelic melodies and hard rock. For more information on this new band, please contact Andy Gesner and the HIP Video Promo staff at(732)-613-1779 or email us at info@HIPVideoPromo.com. You can also visit www.Facebook.com/TheMootekkis for more info.