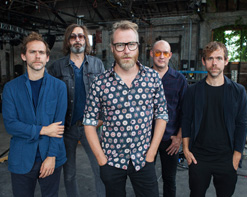 With a regular output of transformative, gripping vibes since their self-titled debut in 2001, The National has reaffirmed time and time again their status as masters of their genre. In fact, many critics would agree that The National are considered the originators of the sound. Paving the way for artists such as The War On Drugs, Arcade Fire, Bon Iver, and more, the lush, in-depth compositions and bucolic baritone of vocalist Matt Berninger create a sonic pool that allows the listener to choose if they want to relax in the shallow end or dive way down into the deep end.

Their seventh studio album, Sleep Well Beast, will be released on September 8, 2017 via 4AD. The album was produced by member Aaron Dessner with co-production by Bryce Dessner and Beringer. Recorded primarily in the Hudson Valley of New York, with additional sessions in Berlin, Paris, and Rome, Sleep Well Beast is proving to be one of the most hyped albums of 2017. How hyped you ask? An NPR listening session/performance at Philadelphia’s spacious Union Transfer sold out in just 7 minutes, while both UK and US tour dates stretching into 2018 are nearly entirely sold out.

This isn’t just them resting on their laurels, either. They’ve teased four singles from Sleep Well Beast, each one generating the kind of buzz most bands only dream of. The newest release, “Day I Die,” has generated 230,000 YouTube views in just three days (as of this writing), and it’s the sort of video that demands multiple views. At it’s core, the concept is simple; director Casey Reas and DP Graham MacIndoe filmed a time lapse video of the band during a sound check. But it’s the wildly creative visual effects that make this video so mesmerizing. Picture some sort of combination of a black and white digital negative with a high pass filter over top, add in a blending of ghosting effects and subtle flashes of color snaking in and out of the shot, and it’s a video that captures the soothing, multi-tiered essence of The National.

It’s a true pleasure for all of us here at HIP Video Promo to be a part of The National and 4AD teams. We are confident that programmers and viewers alike will swoon over this video much like we have. If you are interested in catching the band on tour when they come to your market, please hit us up with your requests! You can email us at info@HIPVideoPromo.com or visit www.4AD.com or www.AmericanMary.com for more info on The National.