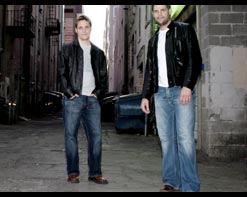 It could be said that The Pinder Brothers have 60’s brit-rock heritage in their DNA with a healthy dose of California-style thrown in. Raised in sunny Northern CA, Matt and Michael Pinder grew up playing music and performing together at every chance that presented itself. The Sacramento, Cali-­‐based duo are renowned for their songwriting and instrumental savvy, and have been compared to the likes of Ben Folds and Wilco. But there’s so much more to their story: The guys are sons of rock legend Mike Pinder, one of the founding members of The Moody Blues. Their newest single for “Last Days of Summer” is the perfect example of the brothers’ ability to “do their own thing” that makes them stand out from the ranks.

They proudly come from a rock pedigree, but bros Michael and Matt are making their own kind of magic, via recently released album “Melancholy Sea.” The 11-­‐track collection—which offers keen observations on the serenity of our world—provides a showcase of the duo’s sing-­‐along pop melodies, alongside enough pulsating guitars to add the bite of alternative rock to their signature sound.

For the new video “Last Days of Summer” they’ve stayed true to their vision of paying homage to the classics that work while doing their own thing. The video is a beauty, mixing black and white performance footage with Michael taking the role of leading man as he spends a beautiful day frolicking out in nature with a gorgeous gal. The memories they have made are blissful, even as the day winds down and they must go their separate ways. The song is just what the doctor ordered to offer up the perfect soundtrack for this summer.

We would love to see this video get the support and programming it deserves, so please get in touch and let us know if there is anything you need to make that happen! You can contact Andy Gesner and the HIP Video Promo team at (732)-613-1779 or email us at info@HIPVideoPromo.com .