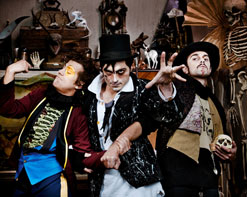 Greetings fellow music connoisseurs! It’s Andy Gesner and the HIP Video crew, here to bring you another wild clip from Italy’s most prominent indie rockers– The R’s. With the creative leap of their last video, “Mr. Hide,” the band has set a pretty high bar for themselves. Fortunately for us, The R’s not only reach that set level, but topple it completely with the effects driven cinematic masterpiece that is “Call Of The Ice.”

The R’s have turned up their sound and creativity to 11 with the release of their awesome album De Fauna et Flora. “Call Of The Ice” is laced with an array of crazy organic sounds including wood blocks, organs, ukulele, and various triangles and bells. The song is given a slightly Spanish meets Western vibe with upswing of the drums and the southern reverby twang of the lead guitar riffs. If “My. Hide” hinted at The R’s affection for David Bowie, “Call Of The Ice” further solidifies this notion while expanding their broad palette. While the last few clips found the band in some pretty neat, yet earthly settings, the group decides to ignore the barriers of space and time for their second single. The clip takes place thousands of years into the past, as the trio is cast as ancient warriors riding a wild stampede of prehistoric oxen. Each member is completely painted jet black from head to toe, and covered with tribal markings. At the center of the clip is an ancient pagan goddess who calls to the warriors from space, giving the whole clip a Dr. Manhattan from The Watchmen movie feel. It’s time “Knights of Cydonia” took a break and let this barbaric and vivid universe rule the music video realm.

If you’re wondering why the name sounds mildly familiar, it’s because The R’s were formerly The Records, a successful Italian indie rock group. The band built a dedicated following with a series of self-released tapes, which led to them winning a music contest sponsored by Italy’s most widely read newspaper and released their first official EP, Joyful Celebration. Their first single, “Move Your Little Fingers,” was aired by most of the nation’s leading radio stations. Their sophomore recordMoney’s On Fire, was produced by Giovanni Ferrario (P.J. Harvey) and gained a great deal of exposure due to one of the tracks from the album being featured on a major national advertising campaign. The success also lead to prominent exposure on MTV Italy. By the end of 2008, they were on best-of lists of the most important newspapers and music publications in the country. “Call Of The Ice” was premiered by Wired Italy, the country’s adaptation of the well-known American magazine. With two American singles underway, De Flora Et Fauna is set to make The R’s as well known here in the States as they are in their homeland. The R’s have recently been highlighted by the popular tech news website Mashable and Tough Customermusic blog. The band is playing a string of dates on the east coast before returning to tour Europe later this fall. You can also catch the band at CMJ this year.

It is a very rare case when a band is able to continuously leap beyond everyone’s expectations with every release like The R’s have been effortlessly accomplishing. We’d love to hook you up with copies of De Flora Et Fauna, so be sure to reach out to get some for yourself and your viewers. If you need more info, call Andy Gesner at 732-613-1779 or e-mail us atinfo@HIPVideoPromo.com .

For info about The R’s “Mr. Hide” video, click HERE

For info about The R’s “I Love My Family” video, click HERE