The Silence “The Fire” 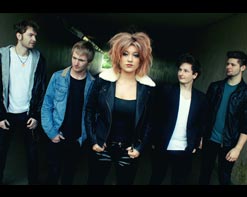 Rock and roll may have originated in the United States, but everyone knows many of the greatest rock bands of all-time were born across the pond. Threading their nation’s great legacy into the modern sounds of today, England’s The Silence–fronted by the beautiful and talented Livvy Griffiths– deliver a slick, sexy, and super-charged take on pop-rock that has already begun making waves across Europe and the UK. After the successful release of their debut single and video, “Barriers”, the band is back with a positively massive new track that is bound to take the Silence to the next level. HIP Video Promo is pleased to present the Silence’s commanding new clip for “The Fire.”

Not too long ago, drummer Max Griffiths and Bassist Liam Slack had been playing together in a cover band, but when the band split up, they went looking for new musicians for a new project. Meanwhile, Max’s younger sister Livvy was singing in another group, but was on the lookout for a new opportunity. The timing was right and the three of them began a lengthy auditioning process that eventually led them to guitarist Gary Johnston, completing the lineup. The chemistry was undeniable, and they quickly found their footing in the genre of pop/rock, with Livvy’s soaring vocals at the center of the band’s ultra-tight, riff-tastic, melodic overdrive. After several tours through Europe, the UK, and as far out as Florida, the Silence worked on their songs for seven months before heading to London to record with producer Matt O’Grady (You Me At Six, Architects). If “The Fire” is any indication, their forthcoming debut album promises to be an explosive, hook-laden affair. Johnston kicks off the track with a crunchy guitar riff before the band blasts in like a bomb. It’s a heavy shuffle feel: badass, danceable, and instantly infectious. Livvy’s strong and sultry vocals build the anticipation before the chorus drops, and you’re introduced to one of the best hooks of the summer. It’s a lean and mean three minutes of pop/rock perfection.

In the video, the band brings their powerful sound to the woods, performing in a forest clearing, as smoke from a nearby fire billows past. Somewhere along the way, a motorcycle gang shows up to catch the show, and lend their muscular presence to the proceedings. The band captures the intense energy of the track, rocking out with style, while Livvy takes center stage with an star-making visual performance, selling the song’s suggestive refrain: “Who started the fire? / ‘Cause now we’re both not sleeping alone.” Whoever she’s singing to, her unfailing confidence suggests The Silence are firmly in the power position.

For more information of this exciting new band and their video, please contact Andy Gesner and the HIP Video Promo staff at (732) 613-1779 or e-mail info@HIPVideoPromo.com .

For info about The Silence’s “Barriers” video, click HERE