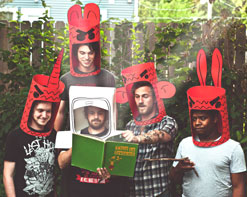 Warm winter greetings to all of my primo programmers from your favorite curator of quality cutting-edge clips! This is Andy Gesner of HIP Video Promo with an action-packed video that is one part creature feature, two parts Michael Bay, and all joyful indie-rock exuberance. The Skies Revolt, hailing from Grand Rapids, MI, is a five-piece band who describe their sound as “aggressive indie with electronics.” More specifically, however, they scramble and reset many of the genre’s best elements into an exciting new sound. The song in question – “It’s All In the Reflexes” – demonstrates this perfectly. Over a driving, danceable stomp, the band delivers passionate gang vocals, buzzing guitars, industrial synths, and slightly off-kilter melodies that only make them more tenacious. Taken from their forthcoming full-length albumSome Kind Of Cosmonaut, “It’s All In the Reflexes” could very well be the first splash from the next big thing.

Born through the interbreeding of many bands in the Grand Rapids scene, The Skies Revolt has featured approximately 20 different members before settling on its current lineup. Singer/guitarist/keyboardist Dave Prindle is the one surviving original member. But the noise this band is making – on record and in the industry – is proof that perseverance pays off. The band is known for it’s dynamic, high-energy live performances, and they gained tons of new fans this past summer, after turning heads at multiple big music festivals. When Some Kind of Cosmonaut drops in March, those folks and many more will be anxiously awaiting its arrival.

But for those currently unfamiliar with the band, the video for “It’s All In the Reflexes” serves as fun-filled and fantastic introduction. Directed by Prindle himself, the clip has it all. (In a nutshell: Robots! Explosions! Lasers! Claymation! Special effects! More explosions!) The narrative is a bit abstract and hard to follow, but it seems to go something like this:

A major U.S. city is under attack. The perpetrators are giant purple, button-eyed monsters who ride giant wild bucks. The monsters are wantonly destroying the landscape with powerful lasers. The heroes of the day, however, are the talented and brave members of the Skies Revolt, who transform themselves into flying robots to defend our beloved city. Their selfless efforts result in some collateral damage to the city, as well. But it’s all good. I think. All of this all may also perhaps be connected to the presence of a terrifying octupus-like creature coming up from the sidewalk.

If this makes little sense to you, rest assured, it’s equally insane on video. That, however, is precisely its charm. It’s a happy head trip from start to finish. Prindle’s inventive, art-house production incorporates various techniques that will draw you into every bizarre frame and demand repeated viewings. And once you’ve had a chance to enjoy the video, pop over to their website to enjoy a Choose Your Own Adventure game! We bet there aren’t any other bands with anything like that being offered!

Together with “It’s All In The Reflexes” as its soundtrack, the video barrels ahead with a powerful, infectious energy. The end product is something like a gripping action sequence from the wildest movie you never knew existed. One thing is for sure: When it’s over, you’ll certainly know that the Skies Revolt is a band to watch. If you’d like more info on The Skies Revolt or get your hands on a copy of Some Kind Of Cosmonaut, please don’t hesitate to reach out to us here at HIP! Either drop us a line at info@HIPVideoPromo.com or give us a call at (732)-613-1779.