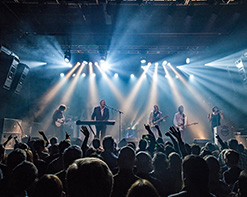 Minneapolis has long been considered one of the great rock cities in America – a place renowned for talent, daring, and artistic experimentation – and the history of music in the Twin Cities can’t be told without mentioning The Suburbs. The group’s early Eighties albums In Combo, Credit in Heaven, and Love Is the Law are cornerstones of Twin Cities rock, and serve as inspirations for the many legendary Minnesota bands that followed. The Suburbs demonstrated that a group could be simultaneously danceable and tough, intellectual and approachable, radio-ready and underground-friendly. They’re the rare records that sound just as fresh today as they did when they were first released.

So when the Suburbs came back after a 25-year break with an album that was just as good as those early sets that are now hailed as classics, nobody in town was surprised. Excellence is expected from this band, and with the Kickstarter success story Si Sauvage, the Suburbs delivered. The reunion set was greeted with a four-star review in AllMusic (“a work that gains depth and power with each listen”). The comeback continued with Hey Muse! — NPR called the group “legendary” and picked the title track for a Heavy Rotation feature (“10 Songs Public Radio Can’t Stop Playing”). “When We Were Young,” the final song on Hey Muse!, is a sharp-eyed look backward — an appraisal of how far the band has traveled, presented over a storm of electric guitar and propulsive beats.

The members of the Suburbs have been fixtures in the Minneapolis arts and music scene for four decades; they’re not just artists, they’re beloved local characters, too. It’s those personalities that are on display in the engaging performance clip for “When We Were Young”.  There’s plenty of fire when the bandmembers take the stage in front of an appreciative audience — these musicians are veterans, and they know how to move a crowd. But it’s the brief, fleeting, candid moments that the camera captures that give this video its peculiar power: a split-second of resolve, a flash of thoughtful recognition, a shadow of a smile. Thanks to directors Mariah Crabb and Jeremy Ylvisaker at Advanced Visuals Wealth Management, The Suburbs come alive in three dimensions here, and no one who watches the “When We Were Young” clip will ever wonder why these musicians are revered — not just in the Twin Cities, but far beyond the borders of the North Star State.

What a treat it is for us here at HIP Video Promo to have the opportunity to work with such a venerable and tenacious band as they come back for another well-earned dance in the sun. The Suburbs are impossible not to root for, so please do not hesitate one moment to let us know what we can do on our end to help secure the “When We Were Young” music video the attention and exposure it deserves. Rest assured we’ll have plenty of outstanding Suburbs merch to set up online/on-air contests and giveaways throughout the campaign so don’t be bashful about reaching out. Contact Andy Gesner and the HIP Video Promo staff at (732)-613-1779, email us at info@HIPVideoPromo.com. You can also visit www.TheSuburbsBand.com for more info on The Suburbs.