The Thermals “Returning To The Fold” 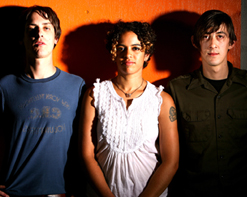 Warmest winter greetings everyone! It’s Andy Gesner and the staff from HIP Video Promo, and today, it’s our great privilege to share the latest clip from The Thermals. The Portland trio has ascended to the ranks of America’s best-loved punk bands, and they’ve done so with their wit, their critical detachment, and their conceptual and political sophistication intact. Singer Hutch Harris is outspoken as a rule, and he’s used his position as the voice of the Thermals to question authorities of all kinds, pillory the Bush Administration, and shake up the status quo. On 2004’s critically-acclaimed Fuckin A, he led the band through twelve furious – and often very funny – broadsides against the powers that be. The Body, The Blood, The Machineraises the stakes considerably: here, The Thermals follow a young couple, on the run from a future Christian-fascist American government not all that much more invasive than the one we currently have.

To tell this detailed, dystopic story, the Thermals haven’t changed their approach at all. They still deliver irresistibly catchy and thrillingly blunt indie-punk, and Hutch Harris still writes with directness and an emotional honesty remarkable among modern rockers. The trio has proven it’s possible to put out a super-smart concept album while staying true to punk’s brevity, force, and economy. Consequently,The Body, The Blood, The Machine has become a favorite of skate-kids, indie-music fans, and veteran critics alike. “Narrative and prophecy”, insists Robert Christgau, “alt needs, held together and moved ahead by its forthright hooks and beats.” “These tracks land like bombs”, raves Amanda Petrusich in Pitchfork, who goes on to call the album “weirdly terrifying, totally Orwellian, and grander, louder, and more electrifying than anything the Thermals have spit out before.”

“Returning To The Fold” comes at a pivotal moment in the story: the protagonists are having misgivings about their flight from the Church-dominated government. Out of the context of the narrative, it’s a powerful statement about the manner in which the abuses of organized religion can turn a penitent away from his own spirituality. Masterfully produced by Brendan Canty of Fugazi, “Returning To The Fold” begins with a ringing guitar riff and ends with a wild plea for salvation. In between, Hutch Harris howls, hollers, and testifies – radiating charisma, urgency, desperation, and good humor as he does.

No matter how serious their subject-matter can be, Thermals videos are invariably playful. The clip for “Pillar Of Salt”, the lead single from The Body, The Blood, The Machine found the band “checking in” for duty on a stage set, tearing it to pieces, and then, the day’s work done, calmly clocking out. The trio’s terrific sense of humor gets another airing in the “Returning To The Fold” clip, much of which captures the band’s endearing hijinks in front of an ever-changing green screen. The video opens with a slo-mo pan along a country road; the members of The Thermals are flung before the lens as if they’ve been heaved there by a catapult. Undaunted, they get up and begin to charge after the camera as it recedes. Later, the three cram into a kid’s buggy (with instruments!) as it careens through the city streets; the toy car capsizes, of course, but the musicians get right up and begin to chase the filmmaker once again. The indestructibility of The Thermals’s enthusiasm is made manifest: no matter what happens, they keep getting the message out. Don’t miss the final shot – it’s a loving homage to the clip for “Sweater Song” by Weezer, another band that paired fun-loving punk with serious commentary to winning results.

Hot on the heels of the brilliant new Iron and Wine video, we’re excited that we have the opportunity to work with Lacey Swain, Megan Jasper and the Sub Pop crew on another outstanding clip from The Thermals. They’re here to help with all things Thermals so don’t hesitate to be in touch if there is anything you need! If you need more info, call Andy Gesner at732-613-1779 or e-mail us at info@HIPVideoPromo.com. You can also visit www.SubPop.com, or www.TheThermals.com to find out more about The Thermals..