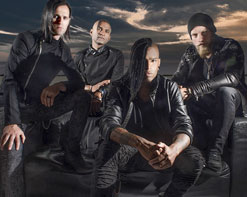 2016 marks the 10 year span between The Veer Union’s first album Time To Break The Spell released in 2006 and their brand new upcoming release appropriately titled Decade slated to be released on January 29, 2016. This marks 10 years of The Veer Union and their struggles of overcoming adversity. Despite his internal battle frontman Cripsin Earl continues to persevere through life and his musical journey, which is what the leadoff single “Defying Gravity,” lyrically signifies.

Crispin began his journey singing, songwriting and producing songs for The Veer Union as a solo project in 2001, at this time the project was called Everything After. Crispin wrote and produced over 15 demos in 2001 before the first incarnation of the band which later would come to be known as The Veer Union. Two of those demos from 2001 “Watch You Lose” & “Make Believe” got Tommy Lee’s attention and in 2005 were used on his solo record TommyLand.

Crispin felt that the new album Decade seemed like the perfect opportunity to take these two songs along with 3 other songs which were written before the first incarnation of The Veer Union 10 years ago, and bring them back to life. 5 brand new songs were also written for this new album bridging the span of over a decade proving that The Veer Union can stand the test of time.

“Defying Gravity” shows the viewer how formidable of a unit The Veer Union really is. The video is shot entirely in black and white, using the lack of color as an opportunity to push the limits of their cinematic boundaries. Naturally, the clip is anchored by the ferocity and intensity of the band performing. The quintet absolutely destroys it on camera carrying this video from beginning to end. Amongst the performance shots are artistic slow motion scenes of various objects and landscapes, each treated with a unique lighting and presentation for maximum. A plethora of objects come crashing to the ground as they test the limits of their own gravity. The destructive nature of the clip exhibits a unique beauty all its own, showing once again that art and positive inspiration comes in all forms.

The Veer Union is now ready to take 2016 by storm with the help of their new labels Pavement Entertainment and Rock Shop Entertainment and we are here to help you get whatever you need to include this killer video in your upcoming programming. We’ve got plenty of copies of Decade available for on-air giveaways, so please don’t hesitate to get in touch if you’d like some copies. You can contact Andy Gesner and the HIP Video Promo team at (732)-613-1779 or email us at info@HIPVideoPromo.com . You can also visit http://www.TheVeerUnion.com/ or http://www.PavementMusic.com/ for more info.