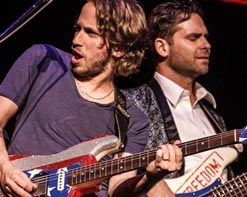 The Young Presidents is a two-member rock band from New York City that blends classic rock & roll with a dash of 90′s alternative. Using a back-to-basics approach blended with a modern sound, Young Presidents returns to the great “power trio” of rock: guitar, bass and drums.

Guitarist/vocalist Jake Hertzog and bassist/vocalist Mitchell Kaneff are united by their passion for rock music and the band is inspired by everything from Cream to Train, from The Jimi Hendrix Experience to Nirvana – just a few of the influences evident on the band’s recently release album, Coalition.

Inspired by the success of their first album, Freedom of Speech, The Young Presidents became involved in an innovative project, inviting guest artists into the limelight with them. Teamed up with renowned Grammy-winning producer Rob Fraboni and collaborating with some of the world’s greatest talent (Corey Glover, Blondie Chaplin, Ivan Neville, Anton Fig, and Adam Ezra to name a few), Mitch and Jake recorded all original material in Avatar Studios in New York City. The result: Coalition. This eclectic and innovative rock album, released digitally, as well as in vinyl and CD, is must-have for anyone interested in cutting edge music and inspiring vocal tracks.

One of the standout tracks has to be “Time,” a blues-heavy, bass-walking jam that features Ivan Neville (of the Neville family) delivering a gut-busting vocal delivery. For the “Time” video the guys brought their talents to Neville’s hometown of New Orleans where they spent a whirlwind 24 hours traveling through the city, featuring stops at the legendary One Eyed Jack’s and in studio at WWOZ FM. As Neville strolls the streets he is engaged by fans and admirers left and right. He hands out white roses to adoring ladies as Mitch and Jake sit back and provide the soundtrack. It’s a taste of a day in the life of Young Presidents and true New Orleans royalty in Ivan Neville. The energy and excitement is palpable, and as the candid involvement of extras in the video proves, this song is as infectious as they come, dripping with killer hooks and awesome looks!

It’s our distinct pleasure to be working with The Young Presidents and their new video for “Time.” We are here to hook you up with whatever you may need to get this video into your programming, so please get in touch! For more information you can contact Andy Gesner and the HIP crew at (732)-613-1779 or email us at info@HIPVideoPromo.com . You can also visit www.TheYoungPresidents.com/ for more info.