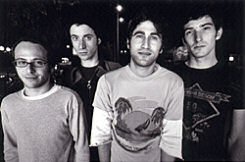 How’s it goin? It’s Andy Gesner and the staff at HIP Video Promo with another great rockin’ roller coaster ride of a video to help get you through the dark, cold days of winter. We’re frankly amazed at the rich and diverse crop of new clips that have come our way in the first few weeks of 2004 – and we’re always thrilled when we get a chance to promote exciting new bands like The High Strung. This talented, juiced up touring machine is seen here performing a track from their critically acclaimed These Are Good Times CD, recently released on New York City’s coolest, biggest balled indie label, Tee Pee Records. A big part of NYC’s recent resurgence as the indisputable center of the Rock and Roll universe, Tee Pee is highly respected and admired for their DIY, grassroots aesthetic and general disdain for the lack of vision and integrity ensconced within the big label morass of arrogance and deceit .

“Real Nice Boy”, the new video from The High Strung, is a tightly framed, snappily edited performance clip shot before an enthusiastic audience (albeit one composed disproportionately of attractive and somewhat provocatively dressed young women). Normally that would be regarded as a music video cliche, but in this case it hardly matters. What’s important about this clip is that it showcases the band’s crackling nervous energy, finely tuned songwriting skills, and ironic “aw shucks” lyrical sense of humor. The sentiment expressed is a joyful, uptight, cymbal-bashing sound that borrows as much from the Motor City’s recent garage-rock scene as from The Beatles. The High Strung”s debut video was directed by JB Carlin, best known for directing the Kid Rock /Sheryl Crow video “Picture”.

Sonically, The High Strung have drawn on the best of the first British Invasion and draped it with the grittier, vaguely dilapidated trappings of the second one (Buzzcocks, Sex Pistols). Guitarist/Vocalist Mark Owen renders the song with an ironic, ingenuous attitude that perfectly complements the tried and true song structure. Producer Jim Diamond (The White Stripes, The Mooney Suzuki), who also contributed the guitar solo to this track, gives the band’s music a bluesy, garage-like sound without compromising their skin tight musicianship and vocal harmonies. This is sassy power pop punk the way it was meant to be played. Fans of the French Kicks, Enon, The Walkmen and Les Savy Fav with fall in love with The High Strung.

We’d usually say something like “originally from Detroit, but now based in…”, but it’s hard to say that The High Strung are based anywhere, since they’ve spent the past year and a half on the road almost constantly in their graffiti festooned school bus. Dividing their time off the road between hometown Detroit and trendy, band infested Williamsburg (Brooklyn), The High Strung have created a buzz for themselves in both locations, not to mention the many towns and cities across the country that embrace the rockers whenever they visit to perform.

Here at HIP Video we are weighed down with The High Strung’s merch, including copies of the new These are Good TimesCD, t-shirts, 3 song samplers and plenty of stickers. We are proud to team up with Tony Presedo and Dale Bookout at Tee Pee to present the “Tee Pee Fistful of Rock” contest. Any programmer that adds The High Strung’s “Real Nice Boy” video in the month of February will enter a contest to win the entire Tee Pee Records catalog (teepeerecords.com, link below) including CDs from such heavy rock buzz bands as Raging Slab and Atomic Bitch Wax. For more info call 732-613-1779 or email info@HIPVideoPromo.com