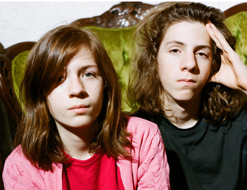 Hey friends, it’s Andy Gesner and the HIP Video Promo staff, here with a new clip from a dynamic pop-punk act with an exuberant sound. So what were you doing when you were eleven years old? Maybe you were the hippest kid on your block; maybe you were even in a band. But chances are, you didn’t release a critically-acclaimed album — one praised by the NME and the All-Music Guidealike, and compared by rock journalists to (among others)The Shaggs, Devo, and The Ramones. And while your friends and collaborators might have been super-cool, we’ll wager that Tiny Masters Of Today have you beat there, too. David Bowie counts himself a fan, Newsweek magazine praised the duo before they’d even played a show; Artrocker called them “the future of rock and rollBang Bang Boom Cake, their infectious debut, featured guest performances by Kimya Dawson, Fred Schneider, The Yeah Yeah Yeahs, and Gibby Haynes. Russell Simins of Jon Spencer Blues Explosion played drums on every track, and Japanese cutmaster Atsushi Numata contributed sound effects and turntable noise.

But despite their famous pals, Bang Bang Boom Cake belonged to Ivan and Ada, a brother and sister combination with compelling tunes, off-the-wall lyrics, and energy to burn. They’ve grown up a bit since their initial success – Ivan is now fifteen and Ada is thirteen – but they haven’t slowed down a bit. “Skeletons”, the latest single from Tiny Masters Of Today, shakes like a shaman’s medicine rattle: the six-string riffs are primeval, Ivan’s guitar tone is wonderfully dirty, and Ada’s vocal pairs the urgency of youth with the insouciance of the best punk rock. She’s singing about monsters, but also about secrets; those skeletons aren’t just reanimated bones, but also the sort of specters that are locked away in closets, out of public view. It’s no wonder so many adult listeners can identify with Tiny Masters Of Today – the pair make the anxieties of youth resonate for those who believe (erroneously) that they’ve left their childhood bedrooms behind for good.

Fitting, then, that Jason Oliver Goodman’s clip for “Skeletons” is shot in a hip teenager’s room. Ivan and Ada sing and play with their backs to the door; they’re in a protective position, but like many kids, they’re soon being spied upon. But it’s not mom and dad rifling through their drawers – instead, it’s undead beasts peeking out between the slats of a louver blind, cavorting in the closet, and interfering with the performance. These four skeletons are well-choreographed, too: even in close confines, they’ve got their dance moves down. The Tiny Masters Of Today are well familiar with monster acts – in the clip for “Hologram World”, the single from Bang Bang Boom Cake, the duo had to contend with a small army of zombies. Those represented the dangerous allure of adult conformity; by contrast, these skeletons are impish, mischievous, playful. Ivan and Ada are as annoyed as they are spooked, and it also quickly becomes apparent that they’re also co-conspirators with the monsters. Then Goodman turns on the blacklight – and the party really starts.

Big thanks to Mute for allowing us to be a part of their outstanding team and bring you the new “Skeletons” video. If you need more info, call Andy Gesner at 732-613-1779 or e-mail us at info@HIPVideoPromo.com. You can also visit www.Mute.com or www.TinyMasters.net to find out more about Tiny Masters Of Today.