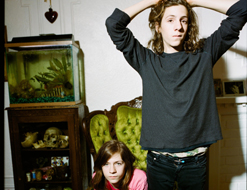 It’s Andy Gesner and the staff from HIP Video Promo coming at you with the newest clip from a gang of young punks who’ve been shaking up the underground. Imagine that you’re a teenager – and a young teen at that – and your band is already respected across the country. With acclaim comes advice; some of it unsolicited, some useful, and some (the most dangerous kind) is official. Thirteen and fifteen-year-old rockers have to cope with incursions from label folks, too, and the Tiny Masters Of Today are no exceptions there. Their second clip from the upcoming Skeletons is a look at the band’s encounter with a hypothetical industry insider – and total monster – who calls himself “The Dreamweaver”; it’s hilarious, infuriating, and ultimately inspiring. The message is clear: when you’re as naturally cool as Ivan, Ada, and Jackson, there’s really nothing for an image consultant to add.

The Tiny Masters Of Today have never shot for the pop charts; rather, they’ve followed their own visions, and done so to spectacular results. That said, if they keep writing singles as catchy, immediate, and irresistible as the two that have been released from Skeletons, they just may land on the hit parade anyway. “Pop Chart” demonstrates the band’s casual wisdom as well as its boundless energy: Tiny Masters Of Today already realize that commercial radio is a money game, and they’re not afraid to say so. Yet they aren’t jaded, or intimidated – they’re just as determined to bring their music to a widespread audience as any prefab mall-punk. “Pop Chart” is, perhaps, the most infectious thing the group has ever done – crammed full of enthusiastic back and forth vocals, clattering percussion, sandpaper-rough guitar riffs, and cleverly-integrated deejay breaks on the chorus. It’s no wonder that so many veteran punks have recognized Tiny Masters Of Today as the true heirs to their tradition: they’re eclectic, irreverent, provocative, and everything else that makes this music so essential.

The Dreamweaver’s “advice” to the band – and his high-paid Los Angeles entertainment consultant’s schtick – would simply be funny if it didn’t all ring so true. At the beginning of the “Pop Chart” clip, he encourages the thirteen-year-old Ada to get pregnant, and informs the barely-older Ivan that he won’t be able to get ahead in show business without a criminal record. He then puts his advice into action, chasing Ada with a baby carriage and arranging for a photographer to snap Ivan’s mug shots. The Dreamweaver demonstrates an absurd gangster walk, nearly asphyxiates the group with a berserk drum machine, and displays pie charts to underscore his point that image accounts for 90% of a pop group’s success (another 2%, we learn, is the ability to read pie charts). A spandex-clad choreographer models a dance that’s one part Rick Astley, one part Riverdance, and ten parts absurd. Through it all, the band plays on; undeterred, proud, and in full possession of their wits and wisdom. Captured in action by Evan Bernard – who has also shot videos for Green Day, The Beastie Boys, and many other legendary bands – Tiny Masters Of Today look every bit the part of young rock stars. They don’t need packaging, and they don’t need pomp; all they need to do is plug in and play.

We’re thrilled to be on board for the second video from this must-see group, and we can thank their fantastic label, Mute, for hooking it up. If you need more info, call us at (732)-613-1779 or e-mail us at info@HIPVideoPromo.com. You can also visit www.Mute.com or www.TinyMasters.net to find out more about Tiny Masters Of Today.