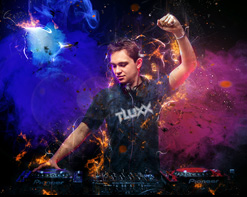 Los Angeles-based EDM artist TLUXX is a major player in the up and coming wave of next-generation superstars. TLUXX has made a name for himself as a promising new DJ at the moment, and he’s raising the bar with not one, but two new club hits. “7th Angel” and “Round and Round ft, Alina Renae “ showcase TLUXX’s inventive orchestration and knack for infectious grooves while paying homage to the heart-warming story of how music saved his life.

The story of TLUXX begins with a boy named Brian living just outside of Albuquerque, New Mexico. As a kid just entering high school, Brian had a dream of becoming a professional baseball player. With talent, experience, and his whole life ahead of him, it seemed like nothing could get in his way. Then the unexpected happened. Brian endured a major health scare, calling for serious surgery. The surgery took such a toll on Brian that he was diagnosed with PTSD, causing frequent panic attacks and anxiety to the point that his mind began to eat away at his every day life. His dreams of MLB stardom were gone. In the darkest corner of this abyss, he discovered the power of electronic music. He hunkered down in the basement for hours on end as his mind was constantly blown by the songs, producers, and community involved in the EDM scene. Upon realizing music was his coping mechanism, a newly inspired Brian decided to self-medicate. He downloaded six free 2-week trials of Ableton Live on his computer under different emails before his mother finally gave in and bought him his first recording software; thus, TLUXX was born.

Once he got started, TLUXX rose like a phoenix from the ashes, going from basement demos to the west coast club scene in the blink of an eye. His single, “Round And Round ft Alina Renae” was released at the end of the summer, and it was just in time to catch that last wave of the sunshine vibes. Featuring the beautiful dancer emulating a sunflower whisping in the wind, the video brings us in circles… Literally. The viewer follows the main character on a merry-go-round creating an undeniably positive energy. EDM producer/singer, Alina Renae features as the lead vocal on the track and brings the song from a fist pumping beat to an all-out Summer anthem.

In biblical terminology, the “7th Angel” is in reference to The Book of Revelation where, in paraphrase, it states: if the 7th Angel blows its horn, God’s plans shall be fulfilled. TLUXX dedicates this song to the friends he lost, at a very young age, to suicide. Trumpets are heard flowing throughout the track to honor the sentiment of the “7th Angel” and let God’s wisdom guide the path of his lost friends. The music video depicts a dancer translating the meaning of the song through the physical form of free flowing body movement. Filmed in the City of Angels, she especially holds true to the song’s meaning by dancing in front of angel wings and utilizing them as a still prop. With such heart behind an already world-class song, there is nothing standing in the way of TLUXX and his compelling story.

It’s a true honor and profound privilege to welcome TLUXX to the HIP family and we’re ecstatic to share these two new video gems with you and your viewers. Please don’t be shy about getting in touch to let us know what we can do on our end to get these videos into your programming and rest assured we’ll have plenty of outstanding TLUXX merch to set up online/on-air contests and giveaways throughout the campaign. Please contact Andy Gesner and the HIP Video Promo team at (732)-613-1779, email us at info@HIPVideoPromo.com for more info on TLUXX.