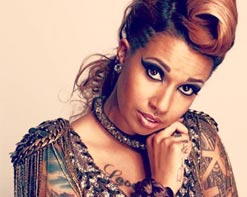 Tuscon, Arizona based pop singer/songwriter Tora Woloshin is one of the most exciting and talented up and coming recording artists within Indie Nation at the moment. With her stunning good looks, lively stage presence, huge hooks, and remarkable dance moves, it’s clear that the only direction she’s going is up. Her musical aesthetic is a compelling combination of Pop, R&B, and Rock, but presented with a confidence and style usually reserved for top shelf recording stars. Her creative and unique blend of these various musical styles truly sets her apart from the crowd, and with a pronounced testicular fortitude and swagger usually reserved for her male counterparts, she’s sure to impress any listener. Her stellar music is an exhilarating blend of disparate influences such as Lady GaGa, One Republic, Mariah Carey, and Michael Jackson, but every song she writes is decidedly her own. Tora just released her new single and video “Life Of The Party” on the “ultimate party night” of New Years Eve, and here at HIP we are thrilled to bring her to your attention.

Tora has been singing, performing, and professionally dancing for over 15 years. Another indicator of her profound talent is that she appeared on the inaugural season of Fox Television’s reality show, The X Factor USA. She started off the season by impressing all four judges with her incredible cover of the Jackson 5 classic, “I Want You Back.” She was complemented by Simon Cowell who called her a “little rock star.” After The X Factor, Tora signed with Fli Life Music, who released Tora’s first single, “Guns & Roses,” in June of 2012, and the fan response was palpable. The song was produced by the powerful musical duo, The Fliptones. Tora also performed the female hooks on B.O.B.’s hit songs “Airplanes” and “Lean on Me” throughout the first half of his nationwide tour (she performed in 16 cities with him). All of this greatness considered, she’s undoubtedly ready for the spotlight in 2015.

Throughout the super fun “Life Of The Party,” music video (co-produced by Tora herself!), it’s clear she knows how to have a good time, live large and love life. The wild dances and party vibe make it clearly synonymous with the song titled. The video is a literal invitation to the party house where all kinds of people show up throughout the music video ready to live-it-up with Tora. The music video depicts Tora as the “Life Of The Party”, while she’s joined by two back-up singers and dancers. In the midst of the wild partying the music stops and “The most interesting man in the world” lookalike from the Dos Equis commercial is featured in a short segment of the music video, with hilarious results. It’s clear that Tora is the kind of intriguing artist that takes everything seriously, except herself!

HIP is always proud to work with innovative and unique artists, and with Tora’s blend of Pop, R&B, and Rock, she’s poised for big things in 2015! Please do get in touch to find out more about this amazing artist and we would appreciate it greatly if you could include the “Life Of The Party” video into your programming! Please contact Andy Gesner and the HIP staff at (732)-613-1779 or email us at info@HIPVideoPromo.com for more info on Tora Woloshin.