I Was Totally Destroying It “Control” 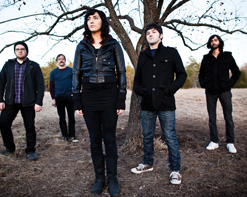 It’s Andy Gesner and the HIP Video Promo crew with a dual vocalist fronted hard hitting hook laced pop rock quintet to color in your darkness and get your feet tapping. With many pop rock artists ditching guitars for house laptop and synthesizer kits, there is a massive cavernous hole to be filled to satisfy us dirty guitar aficionados. Fortunately, I Was Totally Destroying It come in to fill our every desire with their unforgettable new video for “Control.”

Hailing from Chapel Hill, North Carolina, I Was Totally Destroying It are determined to break out of their humble home state by combining musical influences spanning several generations of rockers all at once. This drive 5-piece embraces their love of 70’s icons such as Tom Petty and Elvis Costello, 80’s new wave artists such as The Cure and Kate Bush, and 90’s stalwarts like Superchunk and That Dog – to formulate their own hook-heavy rock machine. Dueling lead vocalists and songwriters Rachel Hirsh and John Booker harmonize lyrics that belie the sweet, sunny suggestions of their upbeat melodies, inviting you to listen in on their conversations about self-loathing, fear, and intimacy. Backed by a powerful rhythm section (drummer James Hepler and bassist Joe Mazzitelli), and the soaring lead guitars of Curtis Armstead, I Was Totally Destroying It have yet to slow down in the nearly 5 years since the band’s inception. The band has toured much of the country, playing with artists such as Conor Oberst and the Mystic Valley Band, Motion City Soundtrack, Cursive, Superchunk, Joan Jett, Ozma and many more. IWTDI were among the News and Observer’s Great 8 of 2008 and The Independent Weekly ranked them as having one of the “Best Songs Of The Year” in 2007, 2008, and 2009! Their current release Preludes has been building on the band’s established foundation, attaining excellent reviews inPopMatters and Impose, which passionately exclaims that the band “sets a ‘melodic 90s indie guitar-rock’ standard that is about as high as can be.” The band has also been featured in a massive television ad campaign by Vivo, Bazil’s largest cell phone service provider.

“Control” is a shining example what an outstanding indie rock band can sound like without ever trying to be pretentious or overly trendy. Somewhere in between Metric and Paramore, this song is jam packed with big drum fills and subtle keys to add to the soaring guitar riffs spiraling throughout the mix. The delicate, yet edgy lead vocals come courtesy of singer Rachel, who steers this ship and allows her male companions to provide the backup layers. The whole video takes place inside a labyrinth built out of couch pillows that ends up being quite spacious and spans numerous corridors. This imaginative setting is a nice alternative to the common stage setups found within genre, giving the viewer a sense of adventure and discovery.

Join us in letting the nation in on one of the best kept secrets in indie pop rock this late fall. We have copies of Preludesavailable for you to check out, so be sure to let us know if you’d like some copies for your loyal viewers! If you need more info, call Andy Gesner at 732-613-1779 or e-mail us at info@HIPVideo.com. You can also visit www.IWTDI.virb.com to find out more about I Was Totally Destroying and their upcoming tour dates near you.