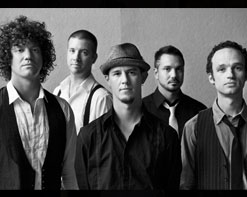 Good day to all my fellow music lovers! This is Andy Gesner of HIP Video Promo with a barnstormer of a video from Asheville, NC’s fantastic Toubab Krewe. On this track – a take on the Appalachian traditional “Cluck Old Hen” – Toubab Krewe add some vocals to their usually instrumental mix to great effect. As is their specialty, when the band taps into the roots of traditional music and add their own magic to the soil, they strike oil every time. “Cluck Old Hen” is no different, and its deep roots and rhythms are positively tenacious.

It’s not mere lip service to call this five-piece group a “true original.” Pronounced TOO-bob CREW, the band makes music that could be described world-fusion, poly-rhythmic rock for the jam-band circuit. Their instrumentation includes (but is not limited to) the soku, the kora and the kamelengoni. And while all that is as good as gibberish to the unschooled, musical education never sounded so cool. Released by the globally-informed and always-interesting Nat Geo Music, “Cluck Old Hen” is a bonus track that will be included on the digital rerelease of the band’s critically-acclaimed second albumTK2.

In the video, directed by HIP favorite Spookie Daly (You Scream I Scream, Heatbox, JJ Grey and Mofro) the story of “Cluck Old Hen” comes to life from the pages of a book, as a farmer closes up his barn doors and retires to his home with the setting sun behind him. When his lights go out, the barn animals – portrayed by men and women in costume – quickly rise from feigning sleep their hay beds and gather for a private concert courtesy of Toubab Krewe, and the jamboree begins. When the noise and the lights of the party turn the ears of the farmer, he runs back to the barn and discovers their secret celebration, only to join the band on stage for a searing electric pedal steel solo. Yes, it all sounds a little crazy. But you’ll be wishing you had a ticket for this performance.

But besides being a great song and video, “Cluck Old Hen” will expose hordes of new listeners to the wonderful and unexpected sounds of Toubab Krewe. As old as this traditional song may be, it serves as the perfect bridge between modern sounds and their global approach, and will rightly earn them many new fans on top the thousands they’ve already gained through their relentless touring schedule over the last five years. David Dye of NPR’s World Cafe said, “Toubab Krewe has the potential to bring its worldly and unpredictable music to a mainstream audience.” Paste Magazine simply wrote “I dare you not to groove!” All superlatives aside, it’s best just to experience this powerhouse for yourself.

We’re excited to once again be working with the good folks at Nat Geo Music to bring you this stellar new clip. We’re hooked up with plenty of copies of TK2, as well as digital copies of the “Cluck Old Hen” single for you and your viewers to enjoy! Please don’t hesitate to be in touch if you’d like to get your hands on some. If you need more info, call Andy Gesner at 732-613-1779 or e-mail us at info@HIPVideoPromo.com. You can also visit www.ToubabKrewe.com to find out more about Toubab Krewe.