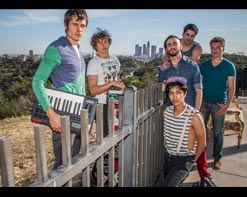 After meeting in an Environmental program at Pomona College and bonding over a shared concern for the future of the planet, Trapdoor Social’s Merritt Graves and Skylar Funk started off on a journey to make some important music and do some good along the way. We’re incredibly excited to present to you their newest video for “Science of Love,” sci-fi infused fantasy party clip with a hook that floats like a butterfly and stings like a bee!

The duo introduced themselves with the 2012 EP “Death Of A Friend”, which combined the two writers’ influences into a driving emotive alt-pop experience. Produced by Curt Schneider, the EP features Death Cab For Cutie’s Jason McGerr on drums. The EP made waves at radio, when their single “Like You Never” became the #1 listener requested track on KROQ’s “Locals Only” show, and enjoyed radio play from a number of major market stations around the US, including regular rotation on Q87.7 in Chicago. On May 20th, Trapdoor Social released the Science of Love EP, their most ambitious project to date. Anchored by the title track, Science of Love explores both sides of the Skyler and Merritt’s influences as songwriters.

The “Science of Love” video is a visual exploration of both the light and the dark. The video begins with Graves and Funk entering a wild party that looks like it could be some sort of Hansel & Gretel house party, but hosted by a decidedly sinister looking man in an all black robotic, militant outfit. The host lures Merritt away from the party and into the back rooms of the house. Skylar goes looking for him and although there’s a party raging out front, what’s happening in back is a dark and ugly set of events. We won’t give anything away, you can be assured that the close bond between Merritt and Skylar prevails in the end!

We’re very excited to be working with this ambitious and creative group, and are here to do anything we can do to get “Science of Love” into your programming. Please don’t hesitate to let us know! You can contact Andy Gesner and the HIP Video Promo crew at (732)-613-1779 or email us at info@HIPVideoPromo.com . You can also visit www.Facebook.com/TrapdoorSocial/ for more info.