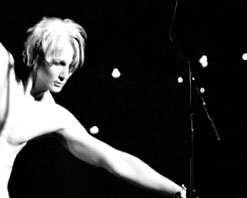 Hello to all my friends in the music video community and welcome to 2006! It’s Andy Gesner and the staff from HIP Video Promo with another great video from across the sea. Today it’s our pleasure to bring to your attention an act that you have probably not yet heard, but one that has proven altogether capable of making its own waves: Trash Wednesday. The British-born, Los Angeles-based singer and songwriter has sold 6,000 copies of his debut, Absinthe Mind, through his website. And without the benefit of a marketing campaign or the backing of a major publicist, he managed to guide his release to #10 on the CMJ charts. A dynamic live performer, Trash Wednesday has opened eyes and ears across the globe – he’s as at home on a European tour as he is in the confines of his hometown Café Largo. Wherever he’s gone, he’s made a profound impression.

The restless, energetic, colorful Absinthe Mind reveals why this inveterate independent has been so successful in connecting with audiences. It’s an explosion of infectious power pop – ten hypercaffeinated tracks bursting with harmonies and countermelodies, buzz-saw guitar riffs, and enough quirky experimentation to justify Trash Wednesday’s reputation as a true original. Most of the songs on Absinthe Mind address the ephemerality of love and the dangerous lure of the superficial, and all are sung from the perspective of a musician familiar with the best and worst sides of rock and roll culture. But Trash Wednesday proves he can step back from the maelstrom and deliver a thoughtful biographical account, too – closing song “Stop Tina Modotti” is a remarkably nuanced treatment of the life and times of the near-mythical photographer and leftist revolutionary.

Like all power pop musicians, Trash Wednesday is drawn to Lennon/McCartney compositions. His choice of a Beatles cover, however, speaks volumes about his priorities: he’s chosen to take on “Lucy In The Sky With Diamonds”, their most ostentatiously trippy number. But how, in 2005, can a musician preserve the experimental and slightly destabilizing feel of a song that is close to forty years old? Trash Wednesday rises to the challenge by pushing the beat and the guitar riff into overdrive – and by inserting strange and unexpected pauses into the story. Some world-famous words are omitted altogether; the singer withholds them playfully, teasing the listener with fake applause before launching into a roaring appendix of his own invention.

To bring this tantalizing version of “Lucy In The Sky With Diamonds” to life, Trash Wednesday has selected fashion photographer Micky Modo. Best known for her startling and occasionally disturbing images of well-dressed doll-like models – shots that actually echo some of the cool depersonalization of Tina Modotti’s work – Modo is an old hand at amplifying the plastic-fantastic elements of public figures. The arch and playful (but always rock-star cool) Trash Wednesday is a perfect subject for her vision – in fact, she has photographed him extensively. Modo’s understanding of Trash Wednesday’s perspective, poise, and humor is thorough, and she presents him as both a would-be superstar and a knowing version of the kickass rock and roller.

The “Lucy” clip finds Trash Wednesday dancing with his six-piece band on a multicolored two-dimensional stage. This is clearly a superimposition of images, and Trash Wednesday makes the most of the incongruity, playing enthusiastically for an audience of gyrating silhouettes. Lucy herself is imagined as an impassive-looking near-goth girl, glancing to and fro, drifting down John Lennon’s famous river in a paper boat, partially concealed by a mesh of colored lines. Trash Wednesday, flipping from side to side like a cardboard cut-out, concludes his tale with a stinging rebuke.

Here at HIP we are very excited to be teaming up with Leanne McNeil and everyone at Friday Music to bring you this terrific clip. We have plenty of copies of Absinthe Mind for on-air giveaways, so if you are feeling the Trash Wednesday love please don’t hesitate to get in touch! If you need more info call Andy Gesner at 732-613-1779, or email info@HIPVideoPromo.com. You can also visit www.FridayMusic.com to find out more about Trash Wednesday.