Tray Bien “So It Begins” 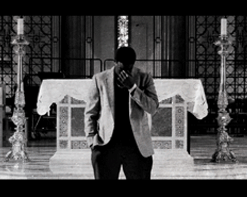 Tray “Tray Bien” Okoth is a Kenyan-American hip-hop artist, poet and author. Originally from Nairobi, Kenya, Tray grew up as the youngest of three children to parents Simon and Elizabeth Okoth. In 2003, Tray and his family made the 7,500-mile move from Nairobi to Richmond, VA, where he quickly made a name for himself in the local scene. HIP Video Promo is pleased to introduce this multi-talented artist’s new music video for “So It Begins.”

In the summer of 2010, a prestigious offer was presented to Tray to play basketball in Europe, but due to problems in obtaining travel documents, he was forced to cancel his travel plans and remain in the states. Though devastated by the situation, Tray refused to let this setback define the direction of his life. He decided to embrace it as an opportunity for him to return home and pursue another passion of his, making music. Music had always played a prominent role in Tray’s life. While growing up in Kenya, he gravitated towards the soulful styles of artists like Billy Holliday and Nina Simone, in addition to drawing inspiration from many unique regional acts in the area. Ayub Ogada, a traditional Kenyan singer, and Bamboo, a Kenyan rapper, were both major contributors to his personal music style.

For Tray, music was far more than just a form of entertainment. He connected with musicians on a distinctively personal level, immersing himself within the thoughts and emotions of their songs. Tray began recording in October 2010, and despite having no previous musical experience, the process for him turned out to be completely organic. Because Tray was already used to writing poetry as a means of expression, he found a natural fit in the lyric-friendly style of hip-hop. He writes all of his own lyrics, so each of his songs serves as a personal narrative about his life and experiences. Tray considers his style of music as distinct, inimitable and revolutionary, referring to it as “world music” due to its universal appeal.

With recurring themes of positivity and self-awareness throughout his songs, Tray hopes to reshape the image of contemporary rap and reintroduce hip-hop as an art form, and that is exactly what he does in his latest music video, “So It Begins.” The clip is a true form of art itself—black-and-white scenes play with this artist’s desire to incorporate art-in-motion. The captivating lyrics and deep vocals highlight Tray’s artistic talents. The creative talents of “So It Begins” shows that this artist understands that art is a very genuine and intimate form of expression, a concept that is noticeably absent from rap music today.

Tray Bien feels as though hip-hop can be a useful mechanism for promoting education, inspiration and positive influence. Through stories he shares and lessons he conveys, Tray wants to change the world, and he hopes that his music inspires the same.

Please contact Andy Gesner and the HIP Video Promo crew at (732)-613-1779 or email us at info@HIPVideoPromo.com . You can also visit www.Facebook.com/TrayBienMusic/ for more info.