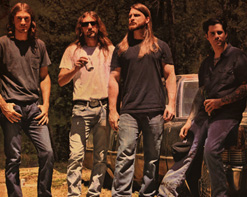 Some say rock and roll died long ago, but one listen to the toe curling sonic energy of South Jersey quartet Triple Goddess and you’ll know it’s alive and here to stay. Drummer Bobby Andrews and guitarist/vocalist Frank Sacco had been playing in prior musical ventures since 2010, and while other members came and went on multiple projects, they continued on together, eventually recruiting Frank’s younger brother Joe to play bass and finally, long-time friend Matt Peterson on guitar.

The result is huge, ass-kicking, feel-good rock and roll. Triple Goddess released their debut EP Pure Power in July 2016. With song titles like “Get Some Rock & Roll”, “Pistol”, and “Bad Boy Boogie” (AC/DC cover), it’s high-octane from start to finish.

Earlier this year Triple Goddess released their newest single “Born To Raise Hell” on Rockhead Records, and if you like heavy-hitting rock in the vein of AC/DC or Lynyrd Skynyrd, we think you’re going to love it. The video centers around a woman that’s “born to raise hell”, and she- and the video- are pure rock and roll: a leather jacket, a motorcycle ride… oh, and when the band performs, sparks quite literally fly as a huge bonfire burns behind them.

We hope you love the Triple Goddess “Born To Raise Hell” music video as much as we do! Please let us know what we can do to get it into your cherished programming. Triple Goddess is always preparing for their next gig, and the band has several upcoming shows (June 4 at The Stone Pony in Asbury Park, N.J.; June 6 at Championship Bar in Trenton, N.J.; June 17 at The Whiskey Tango in Philadelphia; and July 15 at Dockside Bar at Dave & Buster’s in Philadelphia).

For more information please contact Andy Gesner and the HIP Video Promo team at (732)-613-1779 or email us at info@HIPVideoPromo.com. You can also visit www.TripleGoddessRock.com for more info on Triple Goddess.