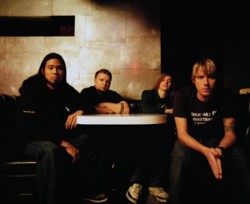 Hello, everyone, it’s Andy Gesner and the staff from HIP Video Promo once again. Here at HIP, we work with lots of emerging bands whose sales records don’t exactly match their critical acclaim. But with Trust Company, that’s not the case at all. This Alabama four-piece made waves in the winter of 2003 with Lonely Position Of Neutral, their gold-certified debut. If you were a modern-rock radio listener then, you almost certainly heard “Hover” or the pummeling “Downfall”. These were the group’s opening salvos, and they established Trust Company as one to watch: tuneful, catchy, yet utterly, relentlessly, and sometimes savagely rocking.

True Parallels picks up right where Neutral left off. Trust Company has toughened up their amalgam of rock, nu-metal, and pop-punk, adding more definition to the guitars – or maybe just playing their instruments with even greater brutality. Singer and lyricist Kevin Palmer has refined his approach, and he’s now writing persuasively about the threats – both internal and external – that young people face. His characters are constantly in danger, yet they claw back against adversity with admirable determination. It’s no surprise that Trust Company has struck a chord with music listeners across the country: their songs manage to be simultaneously thunderous and inspiring.

The lead single from True Parallels is a tuneful iteration of Nietzsche’s famous aphorism about triumph through persistence. That which does not kill Trust Company makes them “Stronger”; in this case, the challenge the narrator faces is a relationship gone wrong. Even in its ugliness – and make no mistake the tenor of the message does get venomous – the sentiment is rousing. The release is big, bruising; a musical tantrum that’s bound to resonate with anybody who’s ever gotten up off of the mat after an emotional beatdown with fists clenched.

Estevan Oriol’s straightforward, proletarian clip for “Stronger” finds Trust Company playing in a setting that couldn’t be unfamiliar to them: a suburban skatepark. The band has set up at the base of the half-pipe, and the athletes confidently skate circles around them. But these aren’t pros, and we watch them mess up from time to time (getting stronger, presumably, as they do); dropping stitches here and there, grabbing their boards on difficult turns, coming dangerously close to the band. Oriol plays with our expectations and keeps us conscious of the risks involved in any performative activity. Is one of these kids going to plow into the bassist? The half-pipe becomes a metaphor for emotional peril; the skaters for the un-dodgeable problems that orbit Palmer like grim satellites.

Seamlessly incorporating the skatepark wheel-scrape sounds into the song, the clip conjures a sense of verite: you feel like you’re there. But the video is also unpretentiously artful in its graininess, and interested in calling attention to its own construction. From time to time, the film slows down to a crawl, and we can see the individual frames on the screen. The effect only lasts for a second or two, but it’s there long enough to remind us all that we’re watching a video, and to provide us some much-needed remove from the intensity of the music and the subject matter.

We’ve very much enjoyed working with Lisa Frank & Christian Taylor and all the fine folks at Geffen Records in the past, and this promises to be a great addition to that track record. If you need more info, call Andy Gesner at (732) 613-1779, or email info@HIPVideoPromo.com. We have a large stock of True Parallels CDs on hand for giveaways, and we can set up video IDs or interviews for you while the band is on tour. You can also visit www.Geffen.com to find out more about this very cool band.