The Vandals “Don’t Stop Me Now” 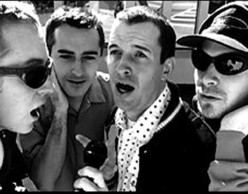 Hi, everybody, it’s Andy Gesner and the staff from HIP Video Promo, checking in with another great new video, one sure to put a smile on your face! The Vandals have been putting a satirical edge to California punk since the early Eighties. They’ve written songs of political protest, songs of social commentary, and a few songs that are just for yucks – but whatever they’ve done, they’ve done with energy, an infectious and cartoonish sense of humor, and a not-so-veiled intellectual subtext. This might be a band irreverent enough to name an album Hitler Bad, Vandals Good, but their songs only seem sophomoric until you engage with them closely. When you do, the genuine and broad social critique behind the seventh-grade humor becomes evident. The Vandals are a band that deserves respect.

Hollywood Potato Chip, the latest salvo from the four-piece, is the most direct statement the band has ever made: an honest-to-goodness punk-pop concept record about laziness, apathy, and self-delusion. It’s also completely hilarious. The band plays “Christian or Canadian” (“the game that isn’t fun”) while identifying humorless groups on modern rock radio, waxes pathetic on the self-explanatory “Don’t Make Me Get My Fat & Lazy Ass Off This Couch”, speculates about running a worker’s compensation fraud racket, and on album centerpiece “Dig A Hole”, guesses that the worst is yet to come. “You think it’s stupid now?” warns singer Dave Quackenbush, “You’ll see we’re only borderline retarded compared to where we’ll be.” The whole thing is a hoot – it’s the best album in the group’s long career, and trenchant satirical commentary on the state of America 2004.

In case you were wondering “Don’t Stop Me Now”, the lead single from Hollywood Potato Chip, is indeed a cover of the 1978 Queen classic. But if you were expecting this gang of wiseguys to do a demolition job on the Jazz closer, you’re in for a surprise. The Vandals version of “Don’t Stop Me Now” turns out to be an extremely enthusiastic attempt to replicate the grandeur of the original on a limited budget – there’s even a dimestore version of Brian May’s climactic guitar solo. Everything about this cover version exudes love and respect for the source. We can’t imagine that Freddie Mercury himself wouldn’t have appreciated the raw punk energy of the Vandals interpretation.

But if the Vandals’ decision to re-record a Queen song isn’t best understood as an exercise in absurdism, the video for “Don’t Stop Me Now” shows that the veteran punks are all too aware of how uncomprehendingly the move could be received by audiences. The clever clip, co-directed by Vandals bassist Joe Escalante and Nate Weaver, draws the connection between classic rock cover versions and celebrity impersonation, and exposes the ridiculousness of hero worship. Shot on the “Walk Of Fame”, the video follows guitarist Warren Fitzgerald as he takes off his street clothes, dons a wig, fake mustache and Seventies-tight running shorts, and sings to tourists in full Freddie Mercury costume. The passersby want nothing to do with him: some smile, a little bemused, but most just try to avoid him. Elvis and Michael Jackson impersonators elbow him out of their territory; he has trouble with his costume; he nearly gets run over by motorists. But through it all, he keeps on with the song – singing into his faux-microphone with a passion and single-minded commitment that’s implicit in the lyric. We’re animated by our own fandom, for sure: our appreciation of our heroes might make us look ridiculous, but there’s a strength there, too. If we’re not afraid to look silly, we might – like The Vandals – find something valuable and unimpeachable at the root of our satire.

This rockingly hilarious video is without question one of the most fun clips of the year and is quickly becoming a favorite among the HIP staffers! Special thanks to everyone at Kung Fu and The Vandals alike for letting us be apart of this awesome project. If you need more info, call Andy Gesner at (732) 613-1779, or email info@HIPVideoPromo.com. You can also visit The Vandals’ official site to find out more about The Vandals.