Vivian Girls “Take It As It Comes” 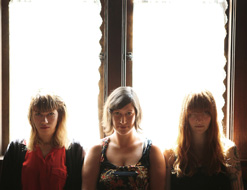 Hello programmers! It’s Andy Gesner and the HIP Video crew here with a video from the Brooklynite movers of the cause, the modern, the lovely, girl group-influenced garage-rockers Vivian Girls. The girls have showed us their dark side earlier this year with their “I Heard You Say,” which featured an array of sweet melodies and soft twang that hid away their brooding teen angst core. Now the trio returns with a more lighthearted, much brighter side of their critically acclaimed Share The Joy LP titled “Take It As It Comes.”

Since the release of Share The Joy, Vivian Girls have toured relentlessly across the US and overseas, sharing the stage with Fucked Up, Black Lips, and Male Bonding. The band is now on a hectic schedule playing festivals here and overseas, including Stuck Festival in Austria and Hopscotch Music Festival in North Carolina. The album has received critical approval from SPIN, who can’t deny themselves a bit of the Girls’ “dash of wintry Mamas and Papas pop,” as well as Pitchfork. “Take It As It Comes” is one of the band’s most upbeat and retro-referencing tracks on the record. In it, Vivian Girls bassist Katy Goodman calls guitarist/lead singer Cassie Ramone for advice about Johnny, her boyfriend, who’s not picking up the phone and probably cheating on her. Cassie reminds Katy that when it comes to love, “you have to think with your head, girl, not with your heart.” Once again, Vivian Girls are able to combine pure old-fashioned pop with indie rock enigma, mixing history with mystery and reverb.

The Phoenix New Times has already called “Take It As It Comes” as one of their favorite video clips of 2011. The track’s visual features the trio debating dating advice over the phone, creating a delightfully retro vibe for the song and following along word for word with the lyrics, paying homage to none other than Grease! The dynamic seemed to really catch on the net, with Complex magazine also running a feature on the clip. It’s easy to see why, as the girls put on their best camera personas for the song. After the call, Katy resolves to go check up on Johnny (or murder him!), but the band gets to her right on time, rescuing her from embarrassment like any loving band mates should.

It’s always a pleasure to be waving the Polyvinyl flag and this video is good example why. Sometimes the best approach is a straightforward one, and Vivian Girls really pull it off as they act out the lyrics. The whole video plays out like a classic teen flick and will instantly appeal to a broad viewership. We hope you join us in shining a light on this superb entry from a band of hard rockin’ gals. If you need more info, call Andy Gesner at 732-613-1779 or e-mail us at info@HIPVideoPromo.com. You can also visit www.PolyvinylRecords.com to find out more about Vivian Girls and any tour dates near you.

For info about Vivian Girls’ “I Heard You Say” video, click HERE