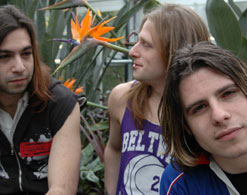 Greetings from New Jersey! It’s Andy Gesner and the staff here at HIP Video Promo, back again with an extremely engaging video from a young indie band just beginning to make their mark on Punk Rock nation. For the past few years, VooDoo Blue has been burning up Baltimore, enlivening the Maryland rock and roll scene with their plainspoken and painfully honest songs. In true punk tradition, everybody in the group sings and writes – and everybody does his best to address the audience frankly, without pretensions or obfuscation. The group’s earnestness, fun-loving spirit, and genuine musical accomplishment has endeared them to Maryland audiences, and VooDoo Blue has twice been named to play on the main stage of Baltimore’s gigantic HFStival (audiences estimated at close to 90,000 people).

To capitalize on the group’s rapidly-growing notoriety, our hard rockin’ friends at DCide Records have pinned down VooDoo Blue long enough to squeeze a debut album out of them. Sure to become one of the best-loved punk records of 2006, Smile n’ Nod is a collection of refreshingly frank, irresistibly tuneful singalong numbers, played with the wide-eyed conviction of rock and roll true believers. Perhaps best of all, Smile n’ Nod contains real guitar solos – the kind you might remember Captain Sensible scrawling out over The Damned’s punk arrangements in the ’70’s and ’80’s.

While a few of the tracks on the album are pure celebrations, most are articulately-written and convincingly-performed explorations of social and personal issues not usually addressed by young bands. “What Happened To Spencer Shipley” is a song about the ramifications of teen suicide, “Cherry Hill” was written in response to a street mugging, and the scathing “Thrift Store Dropout” is an unexpected condemnation of misspent youth. “Bobby Know-It-All”, the lead single, is lighter in tone, but no less engaging – it’s practically a superhero story, and an amusing examination of the uncomfortable consequences of omniscience. And when singer and guitarist Dan Book rips into his solo, it’s with a psychotic abandon that his fussy, radio-ready peers can’t hope to simulate.

“Bobby Know-It-All” needed a video that combined whimsy with ferocity. VooDoo Blue finds the needed visual inspiration in the pages of DC and Marvel Comics, interspersing real-time footage of a young man in a suburban home with X-Men-like drawings of the action (a technique called rotoscoping). The “Bobby Know-It-All” clip, directed by Mr. Oz (Baltimore’s very own Ali G), literalizes the action in the song: the subject logs on to the Internet and is transformed by a lightning strike (while downloading porn, of course), and suddenly achieves the ability to read minds. “Bobby” turns this ability on his girlfriend and his mates, and exposes their philandering – yet he informs his superhero alter-ego that there are some things he simply doesn’t need to know. The dialogue is inked in superhero-comic style: blunt sentences captured in bubbles. The restless shifting between live-action video and drawn sequential art is augmented by horror-movie special effects – lightning traveling up Bobby’s arms, eyes red and gleaming. The whole thing is a hoot: you won’t see a video in 2006 that looks like it was more fun to make than “Bobby Know-It-All”.

As usual, here at HIP we are here for you to make sure all of your VooDoo Blue requests and needs are taken care of swiftly. The band is currently on tour and will continue to fight the good fight when they hit the road again in March, opening up for Zolof the Rock and Roll Destroyer! These Maryland rockers are a musical tsunami you must witness live to appreciate the full force of their unabashed appeal! We can totally hook you up with CDs, tickets to shows and video interviews when VooDoo Blue visit your market, so please don’t hesitate to get in touch. If you need more info, call Andy Gesner at 732-613-1779 or e-mail us at info@HIPVideoPromo.com. You can also visit www.DCide.com to find out more about VooDoo Blue.