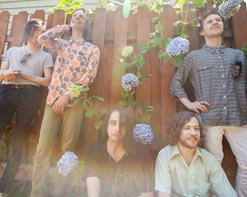 2013 was an incredibly busy year for Wampire. What started as a duo most accustomed to playing house parties in their hometown of Portland morphed into a five-piece band performing in venues all over the world with groups such Unknown Mortal Orchestra, Foxygen, and Smith Westerns. There were more shows, more cities, and more faces seen than everything they’d ever done combined. So when they returned home from the road they knew they would be immediately diving into capturing all of these experiences as part of the follow up to the critically acclaimed Curiosity.

When the time came to record the new album, Bazaar, Wampire principals Rocky Tinder and Eric Phipps relocated to the Greenpoint neighborhood of Brooklyn, NY to once again team with producer Jacob Portait. Though they’ve traditionally preferred to work as a duo in the past to avoid distractions they knew they needed to enlist touring drummer Thomas Hoganson to be a part of the recording process. His diverse musical abilities and (he also plays a mean piano and saxophone) opened up the sound to new directions, and the straight to tape end result is a sound that Paste describes like “Garage rock that sounds like it was recorded at Studio 54 if it was located in M83.”

Finding some sort of balance between not-too-classic cop shows like Hill Street Blues and a more tongue-in-cheek feel like Jason Schwartzman’s Jonathan Ames on Bored To Death, the “Wizard Staff” video is a quirky detective piece that focuses on Tinder and Phipps, better known as Wiz Biz, Inc – Private Eye, as they traverse the city of Portland in search for the mysterious and elusive Wizard Unsub at the behest of a female caller. Whether it be by tandem bike, roller blades, or a run down Saturn S2, they leave no stone unturned. After a chance encounter at a screening of Sax Addict, which naturally occurs during the saxophone solo also includes a clever recreation of the Curiosity album cover, the duo continue in hot pursuit. Will they channel their inner Dick Tracy and get their man or will they be left in the lurch by this crafty wizard? Tune in to find out!For more information on

This is a video that we are certain you and your viewers will get a kick out of, so please contact us to let us know if there is anything at all that we can do to get this video into your programming! Please contact Andy Gesner at (732) 613-1779, or e-mail the HIP Video Promo staff at  info@HIPVideoPromo.com . You can also visit www.WampireMusic.com for more info on Wampire.