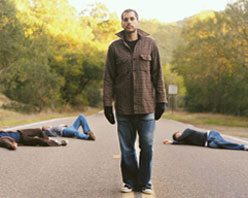 Greetings to all of my esteemed video programmers across the country! It’s Andy Gesner and the staff from HIP Video Promo, with another terrific and innovative video from a must-hear indie act. Today, it’s our great pleasure to be working with Anticon Records to bring you the first clip from the unclassifiable Elephant Eyelash, the latest album by Why? For the uninitiated, Anticon has made its reputation through a series of landmark underground releases that have stood conventional hip-hop, electronic and indie-rock on its head, and influenced and inspired almost everybody who believed in the creative and anarchic spirit of beat music. Anticon introduced the world to a roster of highly individual performers and showed that abstraction need never be a dry exercise, and wore its varied influences proudly. Subsequent releases by members of the Anticon collective have incorporated electronic, ambient music, folk, and indie rock – yet almost all have preserved the lyrical intensity and emphasis on vibrant imagery that is characteristic of rap music at its best.

Why?, Anticon Record’s catchiest and most pop-friendly vocalist, is very nearly a folk-rocker: on Elephant Eyelash, he sings much more frequently than he raps, and his songs are often built around guitar and piano grooves. But his words come in a tumble of surreal and evocative associations. Like the work of the most mind-expanding song writers, his writing establishes alternating moods of freewheeling possibility and profound fear. Anticon artists are masters of tape manipulation and vocal experiments, and Why? is no exception – he layers his folk-pop songs with off-kilter effects, weird voices, and tremulous, double and triple-tracked choruses. But at their core, the tracks on Elephant Eyelash are remarkably effective pieces of indiepop. No matter how far out the arrangements seem, all of these songs could be presented on solo acoustic guitar without losing any of their power. The centerpiece of the album, the gorgeous (if lyrically unique) “Gemini”, is virtually a piano ballad.

“Rubber Traits” is a catalog of desires, and the result of a trip taken deep within the psyche. “Unfold an origami death mask,” Why? sings, “and cut my DNA with rubber traits/ pull apart the double helix like a wishbone/ always be working on a suicide note”. Plainly, this is a writer whose powers of observation illuminate places in the soul that most never bother to inspect.

The clip for “Rubber Traits” is a pastiche, and one that manages to be simultaneously amusing and disturbing. As in the classic video for “Where’s Your Head At?”, the mouth of the vocalist is superimposed upon the face of an animal. But where Basement Jaxx’s vision was clearly meant to be horrifying – a science experiment in creative mutation gone awry – there’s something warm and familiar about the dogs who sing the words of “Rubber Traits”. The partially-human but fundamentally feral faces created by director Ravi Zupa circle and stalk the camera, heightening the surreal feel of the Why? song. Strangely, though they’re cut-out and two-dimensional, they are hardly more cartoonish than the scruffy vocalist himself. He makes the most of his time on camera, presenting himself as an endearing slacker and unpretentious master of language. Words and symbols stream out of his mouth as he sings, hanging in the air before him, and then dissipating.

We are thrilled to be teaming up with Baillie Parker and everyone at Anticon Records to bring the latest clip from Why? Anticon is a label that adheres firmly to the DIY, grassroots aesthetic and together we are prepared to assure you that all of your Why? needs will be attended to in a timely fashion. The new CD has been garnering rave reviews and we will have plenty of copies of Elephant Eyelash for on-air giveaways. If you need more info, call Andy Gesner at 732-613-1779 or e-mail us at info@HIPVideoPromo.com . You can also visit www.Anticon.com to find out more about Why?