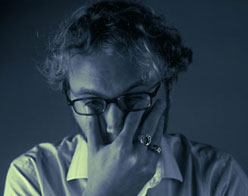 Hello everybody! It’s Andy Gesner and the staff from Hip Video Promo. What is it about Michigan that brings out the patriot in young indiepop singers? In the past few years, we’ve heard the Original Brothers And Sisters Of Love wax rhapsodic about their home state on H.O.M.E.S., and we’ve thrilled to Sufjan Stevens’s impressive and heartfelt Greetings From Michigan. Now, singer-songwriter Brandon Wiard (appropriately pronounced “wired”) proves himself no less enraptured by the Great Lakes State on “Miss Michigan”, a mid-tempo rocker that sounds like a grand, autumnal left-of-the-dial radio hit – and one sure to take its place among the great odes to the Upper Northwest.

Despite what the title implies, “Miss Michigan” isn’t about a beauty queen – at least not directly. Instead, it’s a description of the homesick singer’s state of mind. Alone in a Los Angeles hotel at daybreak, he’s surveying the traffic and the exhaust fumes, and pining for his home state. Wiard, a genial, observant songwriter, offers weary descriptions of his seedy Hollywood milieu that are so vivid, you can almost trace the sunshine streaming through the fog. Heavy-voiced and rueful, Wiard’s lines are punctuated by blasts of dirty guitar and scalding combo organ – this is one indiepopper who knows how to rock.

The chorus is anthemic, sweeping, but intimate, too: here, Wiard reveals that a local girl is the only thing preventing him from returning to his much-missed Michigan. But the relationship is ambiguous – there are signs that his affection isn’t returned, and that the narrator’s reluctance to leave Los Angeles is as much about intoxication with the California dream as it is a desire to be with his intended. Wiard’s head recognizes that he belongs at home, but his heart is chasing Hollywood. He recognizes the problem (and it’s one a few weeks back home in the Great Lakes State would surely cure), but it’s unclear he has the temerity to do anything about it. From this poignancy, a great song is born: one with much to say about the Midwest, the West Coast, and the relationship between the two very different regions.

“Miss Michigan” is one of the most serious songs on the frequently-whimsical Painting A Burning Building. But even here, Wiard’s sense of black humor and wordplay is always evident; backed by the equally amusing Original Brothers and Sisters of Love, his comic talent is as evident as his ability as a tunesmith. The “Miss Michigan” clip foregrounds the amusing side of Wiard: it’s artful, sure, but it’s also pretty funny. And yes, that is stomp-rocker Andrew W.K. making a guest appearance: here, he mouths the words of the song with faux-vehemence, staring at the camera with fuck-you Midwestern defiance.

The video consists of grainy, full-color, washed-out footage (a nice nod to Warhol) of several different people singing along to the track – some in a recording studio, others in stranger circumstances. The singers are typical Michigan guys: unpretentious, grungy, sarcastic, maybe a little combative. They could be the crew that Wiard has left behind to chase his fortune in Los Angeles; they could be pals, they could be unrelated to the story. One sits in a car, distracted, another behaves questionably in a shower stall, a third dances wildly on tombstones, a fourth (probably Wiard himself) saws away at the strings on a violin with a ludicrous intensity. Some of the most heart-wrenching lines in the song are sung by a hand-puppet. By never forgetting to gently mock his own emotional excesses, Wiard broadens the range of possible interpretations and deepens an already complex and moving song. A smart move, made by a smart singer.

We are very excited to be working with Brandon on this really cool project. If you need more info, call Andy Gesner at (732) 613-1779, or email info@HIPVideoPromo.com .