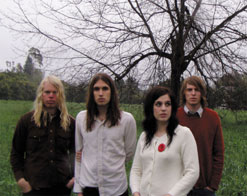 Greetings to all my programming pals! It’s Andy Gesner and the staff from HIP Video Promo, back again with another clip by a young independent band with big-time aspirations and a sound to match. The Willowz are a four-piece from Anaheim that shares more than an association with The White Stripes through indie label Sympathy For The Record Industry. Like The Stripes, The Willowz acknowledge the artful minimalism in punk rock, but are never afraid to make an absolute racket. Singer Follin has one of the most distinctive voices in indie rock: it’s an instantly-recognizable tonsil-quaking caterwaul. And the rhythm section of Jessica Reynoza and Alex Nowicki play like twin banshees, slamming, pounding, and throbbing their way through these tracks with sugar-fixed intensity. Barely into their twenties, The Willowz have already established themselves as four of the most essential rock revivalists in the country.

At home, the local press is already mad about the group. LA Weeklyrecently named The Willowz the best band in Los Angeles: a remarkable achievement for musicians so young in a city crammed with vets and entertainment industry lifers. OC Weekly, the influential arts paper for Orange County, has been flying The Willowz flag for years, devoting cover stories to the photogenic quartet and naming their raucous debut the best album of 2003. The national media is catching on: Robert Christgau gave the band an A- in the Village Voice, and Rolling Stone’s Jonathan Ringen recently called the band “the only thing in the O.C. cooler than Walt Disney’s cryogenic chamber”.

Eaton and Reynoza might be young, but they’re veteran record collectors, and they’ve got just as much appreciation for The Beach Boys and California Pop as they do for the MC5 and The Dead Boys. Talk In Circles, the group’s sophomore release, maintains the scalding fury and hyperactivity of prior recordings – but it also adds ambitious new dimensions to The Willowz sound. The instrumentation and arrangements are fuller: an additional guitar has joined the battle, and the band experiments with vintage electric piano and layered sound. For every fuzzed-out stomper (“Ulcer Soul” is one of these), there’s another cut (like “Unveil”) where the band pulls back and takes the time to experiment with pop song form. The explorations are always joyous and never clinical – but there’s a thoughtful and restless core in The Willowz music that strongly suggests that this is a band that will be developing and putting out great music for years to come.

The band’s video history is already semi-legendary. Michel Gondry, director of Eternal Sunshine Of The Spotless Mind, shot their first clip: a brilliant black-and-white spot for the uncharacteristically gentle “I Wonder”. The vision, which came to Gondry in a dream, of a Christ-like Eaton in a stained suit assembling an automobile from street trash and hobnobbing at the Kostabi gallery, was completely consistent with the edginess of the band and the hallucinatory quality of the director’s work. Gondry became interested in The Willowz after The White Stripes passed him a CD of the band’s early work. The French filmmaker ended up plucking two songs from a seven-inch and placing them in Eternal Sunshine Of The Spotless Mind. Before The Willowz were out of their teens, movie audiences in art houses across the world were watching Kirsten Dunst dance to their music.

There’s undeniably something cinematic about this band – no matter how rudimentary the music gets, it conjures images. No wonder, then, that The Willowz appeal to veteran filmmakers and video directors. Ace Norton, known for his extensive work shooting clips for indie bands, brings out the levitational ferocity of The Willowz in his video for “Ulcer Soul”. The band plays the song while suspended in the air – three or four feet above the wooden floor of their suburban living-room practice space. And this is no gentle float, either: the musicians jerk and twirl and stutter, swinging their arms and quivering like great, giant buzzing insects. Their feet touch the ground for the calmer bridge, but once the searing final verse begins, they take to the air again, thrashing and swinging.

As a bonus, we’ve also included the clip for “Unveil”, directed by up-and-comer Joe Rubalcaba. Here, the band is imagined as a gang of street preachers, printing their lyrics on cardboard placards and marching down the sidewalks, shouting and waving at pedestrians. A passive Christ in the “I Wonder” clip, here Follin is a fiery messiah, arms outstretched, declaiming from a red book, testifying like a soul man.

We are very excited to be working with Sympathy For The Record Industry to bring you two phenomenal clips from such a talented and compelling band. We will have plenty of copies of The Willowz Talk in Circles for on-air giveaways, so don’t be bashful about getting in touch. If you need more info call Andy Gesner at 732-613-1779, or email info@HIPVideoPromo.com . You can also visit www.SympathyRecords.com or www.TheWillowz.com to find out more about The Willowz.