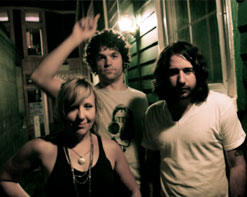 YOU SCREAM I SCREAM

Hello fellow music video lovers, it’s Andy Gesner and the staff from HIP Video Promo, here with a clever new clip from a whip-smart New England band. You Scream I Scream’s video for “Dog” is a startling piece of role-reversal that will surely reinforce the group’s reputation for irreverence. The songs on Bug In A Light are spiked with mordant wit, but we don’t think You Scream I Scream have ever been quite as self-deprecating as they are here. The four musicians trade places with their pets, sleeping in kennels and playing with balls while their dogs drive human vehicles and search the ‘net on laptop computers. The canines are the masters, and the members of You Scream I Scream take the collars. In one particularly arresting sequence, the musicians pant out the windows of a dog-driven SUV while the another man out “for a walk” breaks free of his leash and begins chasing the car!

Director Spookie Daly masterfully plays it all for laughs, of course –but beneath the light tone, there’s a serious subtext. You Scream I Scream has a few striking observations to make about the relationship between owners and their non-human companions, and, by extension, people and dogs in general. It’s funny — but also downright alarming — to see people crammed into wire cages, awaiting their “owners”. It suggests that there’s something quite terrible about the way we treat our own pets; especially when those pets are behaving as recognizably as they do in the “Dogs” clip.

Bug In A Light is crammed with similarly arresting moments. You Scream I Scream can be appreciated as a lighthearted indie-pop band with instantly-memorable tunes, but their barbed tales of modern living always reward close and thoughtful engagement. It’s no surprise, then, that You Scream I Scream has become a favored cult band among brainiacs — including the members of the Presidents Of The United States Of America. As sharp-witted as they can be, they’re often subtle, too, and it’s their expressions of ambivalence that give the band its winning character. (Even the exuberant “Dog” is, upon reflection, a fairly plaintive look at what it means to be “best friends” with an animal.)

The canines in the clip are extraordinary — and not just because they’re mimicking human behavior. Their facial expressions are remarkably sympathetic and identifiable. The illusion works because these dogs really do look like people: we see something of ourselves in their droopy faces. And what do these “people” do with their homo sapiens pets? Something all-too-human: they film them acting adorably, and they post the results to YouTube.

We’re very excited to be working in tandem with Floyd Kellogg and You Scream I Scream to bring you this outrageously awesome new clip. If you need more info, call Andy Gesner at 732-613-1779 or email us at info@HIPVideoPromo.com.