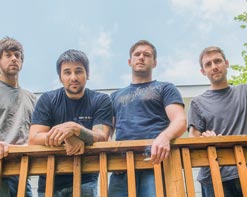 Formerly the leader of the excellent punk-rock/reggae trio Groundscore, Zach Bellas returned as a solo artist, using his smooth tenor, and exquisite songcraft to produce pure and honest rock and roll. A seasoned performer, Bellas has played over 800 shows in 27 states since beginning his music career back in 2007. All of that vast experience shines through in his sure-footed sound. He’s released five albums on his very own label, SMB Records, including his latest–”Let Me Out”–which is the first one credited to Zach Bellas and The Company Band. Produced by Frank Marchand (whose credits include work with Bob Mould and Nils Lofgren), “Let Me Out” is a non-stop, tour de force of rock and roll euphoria. HIP Video Promo is pleased to present the clip for its first single, “Hello”.

Featuring a beautiful melody and a dynamic and dramatic structure, “Hello” is more than your average slice of pop/rock. Zach Bellas & The Company Band deliver an experience that is as lovely as a cool breeze but also has the power to move you. With Bellas delivering the verses with just his voice and guitar at his own tempo, it lends the song a very personal feel. And when the band kicks in behind him for the choruses, they make a serious impact. Lyrically, it’s a song about a single guy taking a chance on a beautiful stranger and finding the courage to put himself out there and just say hello. “I don’t know what to say / but hey, i’m walking over / The only shot I got if I was hoping to know her.” By its conclusion, the guy gets the girl, and the listener gets to hear a great song by a very talented songwriter.

The video is a charming production starring Zach Bellas himself as a lonely bartender, and a tall, gorgeous brunette as the object of his affection. The narrative plays out on screen as his lyrics tell the story. She sits down at a table and orders a single glass of white wine, as she quietly works on a crossword. Bellas brings the wine to her table and then imagines himself singing his lyrics of longing directly in her ear. When an accident at the tap leads Bellas to spray beer all over himself, the incident breaks the ice, and the girl laughs and smiles. Finally, on her way out, she stops by the bar and gives Bellas her crossword puzzle. As she leaves, he realizes she’s left him her phone number, neatly written in the crossword squares. Interspersed throughout, there are great shots of Bellas performing to the camera with his guitar against a backdrop of many lights. In the end, it’s a very satisfying experience, and you’ll find yourself celebrating along with the lucky bartender.