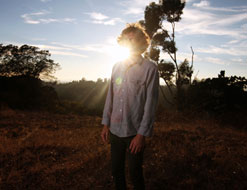 Hello programmers! It’s Andy Gesner and the crew at HIP Video Promo to bring you a brand new group of videos from a well known name in the thrash noise rock world. Zach Hill is no stranger to the genre and proves his chops in with his two new videos for “Sacto Smile” and “The Primitive Talks.”

Zach Hill has made quite a name for himself in the thrash, noise rock, and experimental genre. Hill has established himself in the underground through his band Hella, a now respected name in the category. He has also worked on projects with a range of other musicians including Omar Rodriguez Lopez (Mars Volta) and Team Sleep (featuring Chino Moreno of Deftones). Hill now takes his creative sound to his brand new solo record titled face tat, which features the singles “Sacto Smile” and “The Primitive Talks.”

The “Sacto Smile” video is raw power captured on tape. If you ever felt like nothing today has the same energy as 70s punk did and that no one can make something that feels like Iggy Pop without sounding like Iggy Pop, then this video is what you need. The song’s thumping rhythm and noisy drive is guaranteed to raise your heartbeat to critical levels. Where this video really hits the mark is the visuals. At the center of it all is a completely reckless girl, as she smashes and trashes everything in her sight. It’s rare that a video can capture the true feeling of anger, abandon and surrender to primal behavior as well as this clip does. If this video doesn’t feel like a shot of adrenaline injected straight into your chest, then you’re already dead.

Zach Hill’s second clip, “The Primitive Talks,” is a psychedelic trip. Featuring liquid computer generated animation, the clip feels as if it’s about to jump out at you. Following the adventures of a hand blessed with unforgettably large glue-on nails, the viewer is teleported from scene to scene of wild imagery, featuring doctor’s chairs, watery goo, key boards and many other spectacles. The song’s highlight is the drumming, which Hill is most notably known for. It’s an interesting groove from start to finish.

It is an honor to be championing Zach Hill and we thank Sargent House for allowing us the opportunity to bring his music for your programming pleasure. We’ve got all things Zach Hill, so do not hesitate to ask us for giveaway items. If you need more info, call Andy Gesner at 732-613-1779 or e-mail us at info@HIPVideoPromo.com. You can also visit www.SargentHouse.com to find out more about Zach Hill.