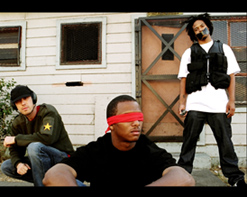 Greetings cherished programmers across the country! It’s Andy Gesner and the staff from HIP Video Promo with another hip-hop video that is sure to knock your socks off. If 2004 in hip-hop was all about Atlanta, and 2005 was the year Houston took over, ’06 has marked the Northern California comeback. And we’re not just talking about “Vans” and the hyphy movement, either – many of the most respected voiced from the Bay Area (Too Short, E-40, Motion Man, and Murs, just to name a few) have returned with nationally-recognized albums. Zion I and The Grouch haven’t been in the game quite as long as those guys have, but make no mistake: they’re Cali rap institutions, and each new record they release is cause for celebration in the hip-hop underground. The Zion I duo have been recording socially-progressive and musically adventurous hip-hop albums since 2000’s landmark Mind Over Matter; best known for his crucial participation in the Living Legends crew and the more straightforward Grouch has been praised for more than a decade for his incisive lyricism and tight emceeing. Now that the national spotlight has swung back to the Left Coast, it’s their moment to show and prove for the rest of the country.

On Heroes In The City Of Dope, Grouch and Zion I have joined forces for a full-length, stripped back the experimentation and sonic detours, and delivered fifteen slamming, straight-to-the-gut rap tracks. This isn’t the first time the acts have collaborated: The Grouch has been a Zion I supporter since the beginning, dropping a memorable verse on Mind Over Matter, and re-appearing on 2003’s Deepwater Slang. With Heroes, MC Zion and the Grouch turn their pens against the usual offenders – wack emcees, rap pretenders, and instigators of thoughtless violence. But they’ve also got some choice words for the technologically-captivated, critiquing the MySpace generation for its isolation and even blaming cellphones for crummy driving of their peers. Producers Amp Live, Headnodic and Eligh (also from Living Legends) keep the beats straightforward and exciting, but they’ve got a few wrinkles for us, too: the jazz setting of “Trains and Plains”, for instance, or the scalding Jurassic 5 collaboration “Too Much”. The sound and feel ofHeroes In The City Of Dope recalls that of early-Nineties California classics by Souls Of Mischief and the Freestyle Fellowship.

“Hit ‘Em”, the lead single, dives even deeper into the red-hot Cali scene – energetic hyphy superstar Mistah F.A.B. joins Zion and Grouch on the mic. F.A.B., best known to the rest of America as the Oakland tour-guide of MTV’s My Block: The Bay Area, raises his game and holds his own next to the two premier lyricists. The track bridges the gap between the timeless underground sound and the current trend, and maybe even points out that the distance between the two isn’t the yawning gulf that it’s often assumed to be.

F.A.B. certainly looks comfortable in Victor Solomon’s grimy, non-playalistic video for “Hit ‘Em”. Surrounded by crew, Amp Live and the three emcees appear in a gritty-looking warehouse reminiscent of Fight Club, a film that, for obvious reasons, resonates with underground battle rappers. They’re spotlighted and introduced like pugilists, each illuminated from top down, in front of a pitch-black background. For the uninitiated, it’s a dramatic introduction to these characters: the hooded Grouch with his serious stare, nappy Zion in his camouflage, and F.A.B. in sunglasses and his backwards painter’s cap. The emcees rhyme as the contestants behind them throw punches, connecting with each other as they conduct their bare-knuckled ritual.

We’re excited that Jonathan McDonald and the crew at OM Records are helping us continue our streak of phenomenal urban video promotions. If you remember, back in late 2003, HIP were the ones to bring you the terrific Zion I video debut of “The Drill”. And we’re thrilled to be back on board with these deserving artists. Zion I and Grouch will be performing together across the country, so if you’d like to set up any video interviews, let us know. We’ve also got more than enough copies of Heroes In The City Of Dope for all of your on-air giveaway needs. If you need more info, call Andy Gesner at 732-613-1779 or e-mail us at info@HIPVideoPromo.com. You can also visit www.OM-Records.com or www.ZionICrew.com to find out more about Zion I & Grouch.

For info about Zion I’s “The Drill” video, click HERE