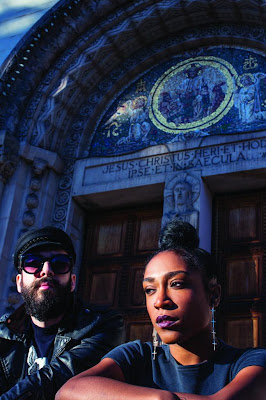 Since this is the first time that HIP Video Promo is working with Hornblow Recordings, we are pleased to introduce the label’s most unique and interesting collaboration, Pyyramids. The band consists of a dark and mysterious union between two beautifully creative minds joined together from a great distance. Comprised of Tim Nordwind from the indie-rock band OK Go, and Drea Smith from the electro-pop group He Say/She Say, Pyyramids initially bonded over an affinity for first-wave British post-punk and 80s Manchester bands.
Their mutual interests have landed them much critical acclaim, and the highly anticipated track “Do You Think You’re Enough,” along with other tracks, is available to stream for free on Facebook! Be sure to check out the upcoming video for their latest single “Do You Think You’re Enough” at www.hipvideopromo.com.