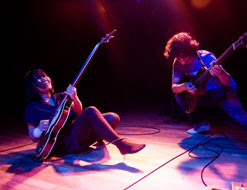 Deerhoof has become one of indie-rock’s most influential bands known to date, originating as San Francisco’s own obscure indie infused rock bands. HIP Video Promo recognized these Polyvinyl Records all-stars as a groundbreaking phenomenon within the indie-rock music scene of today when we brought you their previous videos for “The Merry Barracks”, “Super Duper Rescue Heads !” and “Wrong Time Capsule”. Once again, we have something excellent to write home about, and all of which this uniquely delightful band encompasses can be witnessed in their new video “Fête D’Adieu.”

From their start in the clubs of San Francisco, they have given a new perspective to the contemporary pop-rock genre and are constantly deliverings songs that combine pop requisites and outside the box production. Their musical performances have been known to be unpredictable, difficult to explain, but yet a whole lot of fun. They have toured the world frequently supporting their impressive catalog of self-produced albums. Pitchfork labeled them “the best band in the world,” and The New York Timesdescribed them as “one of the most original rock bands to have come along in the last decade.” Deerhoof’s rising prominence is becoming more and more, and their eclecticism, mixed with their heedless take on pop-rock music, has given them a charm that welcomes fans of every genre. Lead singer and bass player, Satomi Matsuzaki, creates a certain place for music listeners to dwell, and her fellow band mates give meaning to such easy-listening/ambient music in their latest video “Fête D’Adieu” from their new album Breakup Song. Check out the official music video below: