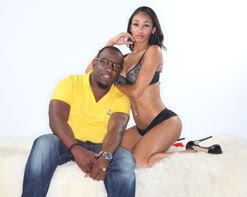 Last year, HIP Video Promo brought you “Like This,” and now the follow up video for the unforgettably seductive songs of Dmaze will leave you wanting more. This hot new rapper on the Miami club scene is taking the hip-hop music scene by storm, so sound the alarms because there is nothing that this high roller cannot do for music fans across the nation.

This Gabon, Africa native has spent years traveling and absorbing the cultures of Africa, Europe, and the United States, creating his own spicy flavor of hip-hop music. However, Dmaze is not just a singer/songwriter, he also is a producer and a well-established businessman. Under his newly established label known as DMS Entertainment, Dmaze releases, produces, and promotes a number of various rising stars, including his own recordings. Above all, he holds a degree in International Relations, which has aided him in the promotion of his musical releases worldwide. His core musical sounds echo the elements of classic hip-hop and R&B, but he often mixes cultural sounds such as African percussion and chants with European club melodies throughout his songs.

Dmaze states, “If you’re a chef, you cook with different spices. That’s the same thing. I try to be a chef and create something different in my music,” and that’s exactly what this artist does. To put it mildly, his latest album Unexpected contains catchy beats mixed with synths that fit well in any party setting. Dmaze’s signature rap flow emanates the smooth, fast, and fresh style that can be heard within his unique vocal accent. HIP Video Promo brought you “Like This,” which was a video that promoted his unique “baller” status, but in his latest clip for “Tonight,” we experience the seductive nature of all that Dmaze’s music encompasses. Full bio HERE!