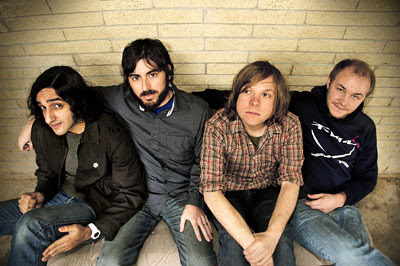 After more than a decade of intricate instrumental rock epics, Explosions in the Sky finally enters the viral visual stream with the video for the band’s new song “Last Known Surroundings,” exclusively premiered above.

“In the 12 years that we have been playing together, we’ve never made or released a video for any of our songs,” the Austin, Texas, band said in an e-mail to Wired.com. “For this new album, Take Care, Take Care, Take Care, we decided to reach out to some talented people and see if we could get something made to order, and the first ‘official’ video from us is now ready to show.”

The result is more than eight hypnotic minutes of geometric mapping, pulsating landscapes and deep-space sojourns, courtesy of the band’s “close friends” at Austin design studio Ptarmak. Featuring illustration from Sissy Emmons and animation from David Hobizal, Ptarmak’s video for “Last Known Surroundings” comes off like a celestial lovechild of the original Tron, 2001: A Space Odyssey and Japanese art.