FENCES TO TOUR WITH AGAINST ME, PLUS MORE! 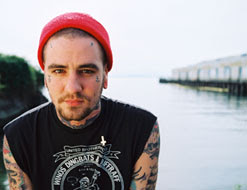 Starting on January 15th, Seattle indie-rock band and HIP client, Fences will be touring a string of dates supporting Florida punk-rockers Against Me!, which will extend all the way to February 13th, hitting major markets across the United States. All upcoming tour dates can be found below.

Also..
A new remix of the Fences track “The Same Tattoos” was released yesterday. DJ/producer Sabzi, who is one part of hip-hop duo Blue Scholars, remixed the song. This is the third hip-hop influenced remix that Fences have been a part of in the last few months, after recently releasing the Sabzi remix of Fences’ song “My Girl The Horse” and the Ryan Lewis remix of “Otherside” by Seattle hip-hop artist Macklemore. “The Same Tattoos (Sabzi Remix)” can be purchased HERE.

Fences, the stage-name for Christopher Mansfield’s mellow and melancholic indie-rock music, recently released their eponymous debut album via Onto Entertainment/ADA records in September, and have been touring throughout 2010 in support of the album’s release. Fences was produced by Sara Quin of Tegan and Sara fame.