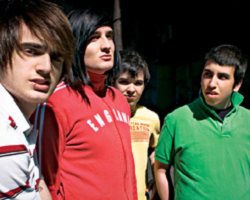 Cute Is What We Aim For is yet another Fueled By Ramen masterpiece. Back in 2006, we promoted “There’s A Class For This”, their first video off their debut album The Same Old Blood Rush with a New Touch. With their pure ability to entertain and conceptual idea for what their band should encompass, we were sure these guys had rightfully deserved success in their future. From Buffalo New York, the three members were childhood friends composed of Shaant Hacikyan, Jeffrey Czum and Tom Falcone.

The band posted their work on every and any platform including PureVolume, MySpace, LiveJournal, and YouTube. Shortly after, they got promoted from their desktop to the recording studio. Their label paired them with producers who have collaborated with Panic! At the Disco, The Used, and Hawthorne Heights- allowing them to rain victorious and put them on the same level of these chart-topping, cultural phenomenons and sub-genre influencers. With a great team behind them that believed in their vision, they were able to release two studio albums under the label: The Same Old Blood Rush with a New Touch in 2006 and Rotation in 2008. They gained extreme success with the single, “The Curse of Curves.”

Listen to their breakout hit here:

This song had such a presence that people thought the band name was actually named “The Curse of Curves.” Cute is what they were aiming for but their audience marketed to a much more desirable crowd. With most of their songs being three minutes long they get to the point quickly with fast melodies, a fun beat, and moving lyrics without adding any filler. Due to this commercial success, their cover art off of The Same Old Blood Rush with a New Touch became a cultural artifact in the punk-pop genre as a symbol of what the genre held to be true. With a drawing of a sexy gothic girl seducing the camera with the contrast of the band shying away in the back, it represents their infatuation with romance. These universal concepts of lust and love gave them a wider audience as even casual listeners now gravitated to their local punk station. Even a decade later from their debut release, people of all ages and walks of life will scream their lyrics- proving their true stamina. The nostalgia that this song is endowed with cannot be replaced or recreated. Although it takes most people back to their middle school days it is not riddled with awkwardness but rather a light in a time that seemed damned to fixed circumstances.

As success hit at an early age, these teenagers didn’t know how to process their rising level of popularity. Chaos quickly ensued with added drama and pressure to produce. From their basement to the big time- their wildest dreams were coming true as the top producers and fans started to legitimize their efforts. Unable to deal with the pressure of a major label, the band split up after the initial release. After their flames of fame had begun to dull down, they came back together for their second project and shared more singles including “Practice Makes Perfect.” Although they have yet to release a third project they have proved themselves by their additions to multiple Punk Goes Pop albums and a feature in Megan Fox’s best movie to date: Jennifer’s Body (Panic! At the Disco were also on the soundtrack). Although they were in a different place, the same problems were still there: turning their act into a spectacle rather than a tight-knit group of best friends- and it wasn’t cute.

With a second breakup and a silence that hadn’t been broken for three years, all three members realized that that their egos were controlling something bigger than themselves. A decade after their debut album release, they decided to have a reunion tour to pay tribute to the mark they left on music. With a strong fan base in Australia, they capitalized on their international success allowing them to tour around the world and did a leg in America. The members all stated that they were shocked and amazed that audiences across the world were still die-hard fans of the music they put out once upon a time. With the changing climate in the industry, their influence never died out as fans wished for their hopeful return. They say that fame can’t buy happiness but the overwhelming support from their fans cannot be bought or exchanged- the ultimate prize in life and the pinnacle of their career.

We’ve been big fans of Cute Is What We Aim For since the beginning and shot them to their rightfully deserved stardom, and we are ecstatic to be promoting the some of the greatest acts of the 2000s. We can’t wait to see what diverse artist becomes the next breakout star. Do you think your video has what it takes to be the next worldwide smash hit? Get in touch with Andy Gesner and the rest of the HIP Video Promo team by giving us a call at (732)-613-1779 or emailing us at info@HIPVideoPromo.com.