Flashback Friday – Cute Is What We Aim For 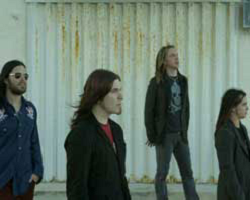 Shinedown formed in 2001, after frontman Brent Smith’s prior band Dreve parted ways. The Jacksonville, Florida natives released their debut album Leave a Whisper on Atlantic Records in 2003, and in 2006, we had the pleasure of working with Shinedown to promote the music video for “Lady So Divine”, from their 2006 sophomore album Us and Them. “Lady So Divine” is a seven-minute epic on the album, though for its video its been cut to just under three minutes. It’s a slow build but keeps Jasin Todd’s remarkable guitar solo intact. Like the track itself, the video is atmospheric, as the camera follows the swift flight of an animated black bird over forests, through tunnels, and along city highways. Strange circles are superimposed over the footage, and it’s never quite clear what they’re for.

More than a decade later, Shinedown continue to be one of rock’s most successful acts, with ten million records sold worldwide and twelve number one singles on Billboard’s Mainstream Rock chart. Shinedown released their sixth studio album, Attention Attention, in May of this year. The album was produced and mixed by bassist Eric Bass, making it their first to be entirely produced and mixed by a member of the band. The album topped Billboard’s Top Rock Albums, Hard Rock Albums, and Alternative Albums charts, and reached number five on the Billboard 200. Following a spring tour with Five Finger Death Punch, they’re currently on the road with Godsmack; head to their website to see if they’ll be in a city near you.

We’ve been big fans of Shinedown since long before we had the pleasure of working together. We can’t wait to see what diverse artist becomes the next breakout star. Do you think your video has what it takes to be the next worldwide smash hit? Get in touch with Andy Gesner and the rest of the HIP Video Promo team by giving us a call at (732)-613-1779 or emailing us at info@HIPVideoPromo.com.