Flashback Friday – Flyleaf – “All Around Me” 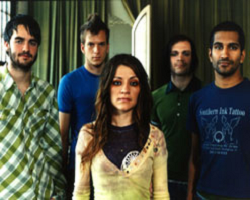 Flyleaf came onto the scene and immediately hit success. They rose from the plethora of punk music in the 2000s and pulled from all the strengths of the genre to create something entirely new but still rooted in the main characteristics. They released their first self-titled studio album in 2005 and put out the follow-up Memento Mori in 2009. These two releases contained a number of hit songs that gave them a wide audience and made them a known name in the punk world but also the contemporary radio sphere. By having an extremely talented female lead vocal performer, Lacey Sturm the bounds of what they could create was limitless. She has a monumental set of pipes, with a range that evokes emotion from her pure talent which is intense but still remains vulnerable and approachable. Her vocails contained elements of pop while also simultaneously blending heavy rock. She sings from the depth within her soul, writing extremely personal lyrics about suicidal urges and her desire to find God. Although she broke into ballads she is not afraid to go in a more metal direction- screaming bloody murder on the end of her testaments, also known as songs.

The focal point of this band’s talent can be shown in their critically acclaimed music video for, “All Around Me.” Around ten years ago Flyleaf asked us to represent them and we picked up the call after the first ring. Acting as an undercover Christian rock band, the idea certainly intrigued us. Every aspect of “All Around Me” screams the 2000s and highlights all the best qualities of the time. The video opens up in a classic gothic fashion, with black hair and makeup to match the tone of the video. Draped across an entirely white backdrop, Lacey Sturm commands the room. Once again she’s seen performing barefoot (a choice she often makes because it allows her to be more free with the audience as she lets us into the deepest corners of her internal dialogue). With blood dripping down the walls, her agony consumes her in her final moments. In a nearly psychotic state she wails, “I’m alive, I’m alive” though her tone suggests otherwise. The message could be easily mistaken as a love letter but it holds a much deeper truth. As the half-time drums and rock-solid bass rings true, her spiritual statement begins to unravel. Lost within herself, she rarely opens her eyes to block out the chaos of the ever-changing background. She experiences clarity at the bridge but it is short lived with the raging chorus that eventually engulfs her.

“All Around Me” got to the number 40 spot on the Billboard Top 100 Chart and stayed there for around 20 weeks. After their success, Flyleaf has also created and crafted a series of equally as good videos and songs including, “I’m So Sick,” “Sorrow,” “Fully Alive,” “Horizons” and “Again.” Their consistency and undeniable talent played a huge role in the punk movement and increased the opportunities for lead female vocalists to command the stage.

Although the band was on the top of the world and the charts, their songs contained highly suicidal lyrics that Lacey Sturcould no longer handle. Lacey decided to departure on another path, leaving her band in 2012 to find herself and God before her depression took her life. Lacey never had an easy life and experienced tragedy that ripped away from her innocence at a young age. Present day he has stated that she finally found God after years of yearning and wrote an autobiography entitled, “The Reason: How I Discovered a Life Worth Living.” She has found peace within herself but her road to clarity has been documented through her musical work, which we should all thank her for. She made the right call and Kristen May, formerly of the group Vedera, took the mic as the new lead vocal performer. Even though it was not the same, Flyleaf will live on forever.

We’ve been big fans of Flyleaf’s purely punk-pop sound from the start, and we’re glad that they had a happy ending despite the long road. We can’t wait to see what budding artist becomes the next break-out star. Do you think your video has what it takes to be the next worldwide smash hit? Get in touch with Andy Gesner and the rest of the HIP Video Promo team by giving us a call at (732)-613-1779 or emailing us at info@HIPVideoPromo.com.